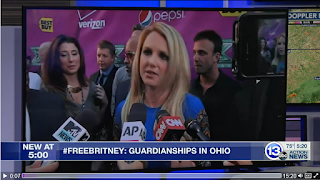 SYLVANIA, Ohio (WTVG) - The hashtag #FreeBritney is about letting pop star Britney Spears make her own decisions, but disability activists say it can end up helping people across the country take control of their own lives.

Spears is being allowed her own lawyer and is asking to press charges against her father, Jamie Spears, for conservator abuse. The pop princess has been living under a conservatorship for the last 13 years. It limits her ability manage her finances and make decisions about her life. Now she’s fighting back.

“I feel like it’s brought light to something that we’ve been trying to bring light to for a very long time,” says Dawn Bentley, with the Ability Center of Greater Toledo.

Britney Spears is not the only adult in this country with a court-appointed conservator. Here in Ohio, an adult guardian is the equivalent of California’s conservator. It is a person who is court-appointed to make decisions on behalf of another adult who has been deemed mentally incompetent.

“The reason guardianships exist so that someone who is unable to care for themselves or their property can be properly cared for,” says Nicolas Linares, an attorney with Shumaker, Loop & Kendrick.

Linares specializes in trust and estate law, including probate matters, such as guardianships. He says that the Spears case is so unusual that it likely won’t have much influence in case law that shapes future guardianships.

“I find that it’s most common that the types of people that have guardianships are elderly people, those with Alzheimer’s or dementia,” he says.

“High school is a scary time for parents of youth with disabilities... when you start to think about what does adulthood look like for my child?”

Bentley says that guardianships grow from good intentions, but she advocates for less extreme alternatives.

“You’re taking away their independence,” she says.

According to Linares, in Ohio judges must consider those alternatives before appointing a guardian. He also says that those being put under the care of a guardian (known as wards) have a right to their own legal representation. Wards can also contest the appointment of a guardian, and have the right to request the guardianship be reevaluated annually, which would allow a person who has gained their competency to regain their decision-making power.

As Britney Spears publicly fights for her own power in court, Bentley says that the case is changing the conversation about guardianship nationwide.

“For so long, guardianship was looked at as the rights of the guardian, and what they oversee, and now people are starting to see that it’s about the person and what their rights are, and what independence means to them,” she says.

Bentley says that watching the Spears’ case has been empowering for others with disabilities who want to gain more independence. She also says it is opening the door to conversations about alternatives to guardianship, something that disability advocates have been trying to educate the public about for years.

The Ability Center has a guide to guardianship alternatives which is attached below.

Full Article & Source:
#FreeBritney - How the pop star’s conservatorship battle could change lives around the country
Posted by NASGA