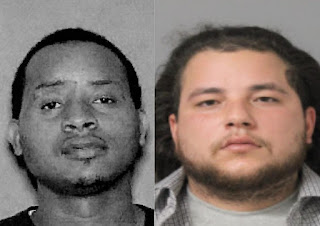 Two men who reside in the Bronx, New York are wanted for their roles in an elderly scam that took place in Ocean County, Barnegat Police Chief Keith Germain and Ocean County Prosecutor Bradley Billhimer announced on Thursday.
There are warrants out for the arrests of 34-year old Jorge Peguero-Mendez and 24-year old Richard Quinones-Perez who have each been charged with Theft by Deception as well as Conspiracy to Commit Theft by Deception.
This all stems from an incident that occurred last month in Barnegat when an elderly woman received a call from a man claiming to be her grandson.
He said he was in a motor vehicle accident in New York City and that he was arrested because the other driver sustained injuries and that he already had a lawyer appointed to represent him.
Shortly thereafter, the woman got a second phone call, this from a man claiming to be the man's attorney (her fake grandson) and he said he could get her 'grandson' out of custody if she gave him $8,000 in cash.
Both men then drove down to Barnegat and one of the men pretended to be a courier there to pick up the $8,000.
When she spoke to her family, the woman realized that she had fallen victim to a scam and that her grandson was not arrested.
Barnegat Police began an investigation and along the way they learned that similar incidents, scams had occurred recently in Hopewell Township as well as up in Nassau County, New York.
As the investigation progressed, Barnegat Police worked with Hopewell Police, the U.S. Department of Health and Human Services - Office of the Inspector General, Nassau County New York Police Department and the Ocean County Prosecutor’s Office Economic Crime Squad.
Peguero-Mendez and Quinones-Perez were later identified as the individuals responsible for the scamming incidents in all those areas.
If you or someone you believes you've been victimized by these men or know any information on where they are, you're urged to contact Officer Robert Armstrong of the Barnegat Township Police Department at (609) 698-5000.
“These types of incidents should serve as a cautionary tale for all of our senior citizens here in Ocean County, as well as a reminder that unscrupulous individuals are out there just waiting to prey upon the most vulnerable members of our community,” Prosecutor Billhimer said in a statement. “Please be vigilant in identifying these fraudulent phone calls, and recognize that any phone call or message requesting large sums of cash or wire transfers is likely a scam. These types of calls should be immediately reported to law enforcement."
Full Article & Source:
WANTED: Two Bronx, New York men for elderly scam theft in Ocean County, NJ
NASGA
Share