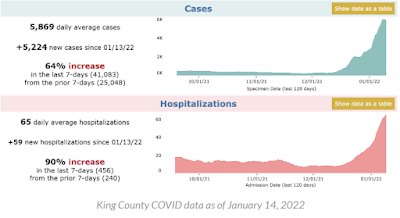 Seattle Rep. Nicole Macri (D-43) is working on a bill to reform Washington’s informed consent and guardianship laws, which have prevented hospitals from discharging some patients who need long-term care at a time when hospitals need as many beds as possible to handle the latest spike in COVID cases.

Washington’s guardianship and informed consent laws have prevented hospitals and family members from transferring some patients who cannot make decisions for themselves into long-term care facilities even when a family member has given consent. Macri has a bill cued up which will address the problem, she said.

Right now, hospitals have patients occupying hospital beds that could be used to treat people with acute needs because they don’t have a paper saying who’s going to front the bill.

As of January 12, Washington state has 2,062 COVID patients in hospitals with 172 on ventilators, according to state data. In King County, hospitalizations more than doubled between January 2 and January 9, county data shows.

Hospitals in Washington have said they are in “a state of crisis” after operating for months at high capacity and now with omicron sending more people to the hospital than ever before.

The Washington State Medical Association sent Governor Jay Inslee a letter last week saying that hospitals are in “a state of crisis” and asking the governor to change guardianship laws so that family members can agree to transfers. The letter included the draft of a proclamation that, if Inslee signed, would have that efect.

However, Inslee said last week that he does not have the executive authority to make the proclamation because, “you have to comply with federal law to admit someone to a long-term care facility. I cannot waive federal law.”

Instead, the governor—inadvertently highlighting the need for Macri’s fix—announced Thursday that he hopes to increase the number of social service workers who work on patient transfers. He also proposed create a program to expedite the process of establishing guardianships and increase the number of guardians, which could help reduce the backlog of patients stuck in hospitals. “[This] may involve more resources for the superior court,” he said. Additionally, to help long-term care facilities take on more discharged hospital patients, he’d add new health care workers to long term care facilities.

Macri says her bill is still necessary because establishing guardianship “can still take months even with the steps that [Inslee is] putting in place.” Her bill will change informed consent laws to allow family members, those with power of attorney, and other surrogate decision makers to consent to a patient’s transfer to a long-term facility.

Macri plans to meet with the governor’s team about her bill to hammer out how it fits in with Inslee’s plans and to address some concerns the governor’s office has around informed consent. One potential sticking point is that, according to Macri, Inslee’s team is sticking with their position that only guardians should be able to make these transfers happen.

Meanwhile, patients without guardians are not the only ones who are having a hard time getting out of hospitals. Often, there are no shelter beds available for homeless patients. And some patients came to the hospital from long-term care facilities but are unable to go back into their care because of understaffing.