NASGA member Dee King and her father Daniel Gross are featured in a December 2007 issue of Healthcare Liability & Litigation from the American Health Lawyers Association.

From the article:
"His lawsuit says Daniel Gross, an eighty-six-year-old resident of New York, went to a Connecticut hospital for treatment of leg problems and ended up, as a result of a conservator’s appointment, on a locked ward of a nursing home where he unnecessarily remained for almost ten months. During that time, Gross charges that his assets were dissipated, visitation with his family restricted, and that he suffered abuse from his nursing home roommate.

A May 2007 ruling dismissed the claims against the probate court judge on the ground of absolute judicial immunity. Gross’ attorney has filed a notice of appeal from a subsequent order denying a motion for reconsideration of the immunity ruling.

The claims against the nursing facility include conspiracy to deprive Gross of his civil and property rights, violations of Gross’ right to privacy and familial integrity, the Omnibus Budget Reconciliation Act of 1989 (OBRA), the Americans with Disabilities Act (ADA), the Connecticut Patient’s Bill of Rights, and intentional and negligent infliction of emotional distress. Among other averments, the complaint maintains the nursing home is required by the Social Security Act, 42 U.S.C. § 1396r(b)(2), to provide services to maintain the highest practicable physical, mental, and psychosocial well-being of its residents and that it failed to do so." 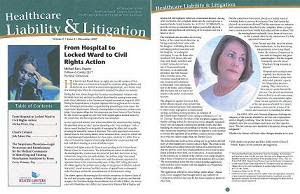 About the AHLA (from the site):
Leading health law to excellence through education, information, and dialogue, the American Health Lawyers Association (Health Lawyers) is the nation's largest, nonpartisan, 501(c)(3) educational organization devoted to legal issues in the healthcare field with more than 10,000 members. Currently 37 staff members are responsible for the operational activities of the organization.

Dee is a valuable member and honorable advocate. When NASGA spoke to Dee, she talked about him looking down from heaven and celebrating Maydelle’s freedom. Dee said she had told her father that he made a difference and it was because of him that the movement began in Connecticut.

Daniel Gross will live in our hearts forever.

Reform, Not Now, Not Ever

The Scandal of Connecticut's Probate Courts