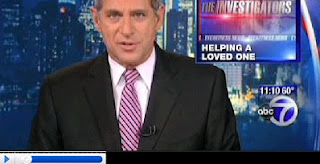 A Brooklyn family says they had no idea what they were getting into when they agreed to let an agency take control over an elderly relative. Now, the family is fighting to get control back. This is an issue faced by an increasing number of families. Older relatives who can no longer take care of themselves, who should become their guardian?

Eighty-three-year-old Leola McAllister now lives in a sparsely furnished Brooklyn apartment. She's paying $1200 a month in rent, even though she owns a three-family home in Bed-Sty that she lived in for 30 years.

When the daughter and two aunts couldn't agree on who should become guardian, the family says they were referred to an attorney who recommended a court-appointed guardian, a non-profit agency called the Vera Institute, which has offices in the courthouse in downtown Brooklyn. "They convinced us, along with our lawyer and judge that they were the perfect people to take over that way we wouldn't be family conflicted."

But Mrs. McAllister's family says they became alarmed when the agency moved her out of the home she had shared with Tammy and placed her in a sterile apartment, and then started spending thousands on 24-hour home-health care aides - $66,000 in 2007 alone, plus more than $14,000 for rent. "Their whole aim was to get the property, sell it, and put her in a nursing home."

Full Article and Source:
The Eyewitness News Investigators-It's a controversy over a court-appointed guardian

More than $11 million in fees and expenses for lawyers who filed a lawsuit that led to dramatic changes in Georgia's foster care system is in dispute.

The 11th U.S. Circuit Court of Appeals declined to rehear the state's appeal of U.S. District Judge Marvin Shoob's award of $10.5 million in attorney fees. At issue is whether Shoob correctly applied a $4.5 million enhancement on top of a $6 million award.

Circuit Judge Ed Carnes, one of three who disagreed with the decision not to hear the appeal, suggested the matter should be decided by the U.S. Supreme Court.

Jeffrey O. Bramlett, one of the plaintiff attorneys, said the award totaled nearly $11.3 million and interest has been accruing at 4.19 percent a year. Bramlett: "how would you like to not get a paycheck for three years?"

The class-action lawsuit, settled in 2005, prompted the state to reduce worker case loads, improve investigations into abuse and prevent overcrowding in foster homes.

Children's Rights, the advocacy group that brought the lawsuit, asked Shoob in August to find the Division of Family and Children Services in contempt for allegedly failing to meet court-ordered requirements to place thousands of foster children in permanent homes.

Forced Into A Nursing Home

Lifelong factory worker Dorothy “Dot” Williams saved, signed a will with durable power of attorney, set up a $300,000 annuity and took out home health insurance to avoid having to go to a nursing home. Yet that’s where she is — in a cramped, semiprivate room, where she shares a bathroom with three others.

Williams is a ward of the state, diagnosed with Alzheimer’s and declared legally incompetent at the request of her estranged daughter, who had been removed from the mother’s will. And because her court-appointed guardian decided it was for the best, she has been placed in a nursing home despite paying for round-the-clock coverage for home health care.

Previously, Williams had a neat, well-appointed room with a private bath, sun porch and closed-circuit camera for security at the home of her son, Randy Clark. In 2007, Williams had given her son power of attorney, and he hired home health aides to take care of his mother 24 hours a day.

When Williams’ last CNA left on maternity leave, the son could not hire a replacement, unsure of when the worker would get paid. Clark said of his mother’s wish to stay at home: “It would have been a piece of cake, but if they’re not paying for your wages or your supplies, they’re basically starving you out. I have to be there basically 24/7.”

The court-appointed guardian of the estate, attorney Wanda Daughtry, said she cannot discuss finances of clients, and in September petitioned to resign from the case.

Attorney Daughtry received a $5,830 commission. Williams may also have to pay the $14,830 in attorneys’ fees, including the services of a private detective, that her daughter incurred in getting Williams declared incompetent.

Full Article and Source:
Ahearn: How did it all go wrong?
Posted by NASGA 13 comments:

Bill Mitchell, a pension lawyer, unveiled his proposal for a new federal statute, the Senior Citizen Protection Act. One aspect of the law would help seniors protect their investments from predatory financial advisors.

Mitchell: “We want to have a provision that puts a fiduciary standard on those advisors. A fiduciary standard that is similar to that that is imposed on trustees for federally protected pension plans. And that standard requires that folks provide for diversification and provide for liquidity. And that guards against the danger of seniors being put into highly risky and highly dangerous investments.”

A second component of Mitchell’s proposal seeks to protect the liberty of elders from predatory guardians and stems from lessons he learned from the case of Adele Fletcher.

Mitchell is proposing a federal standard that a person who is not a family member must get court approval for a pre-need guardianship. In the case of Adele Fletcher, such a guardianship was set up by Fran Lang, who did what Mitchell called “a second shocking thing.”

In his proposed legislation, Mitchell would require that transcripts be made of guardian hearings. It would also give federal attorneys the authority to go after guardians and attorneys who violate the trust of their wards.

In July 2007, Richard and Melissa Adams petitioned for appointment of co-guardianship of Ashley, which was granted on Nov. 30, 2007. The lawsuit alleges the Adams’ obtained the co-guardianship order without notice to, and in violation of, the due process rights of Robin Evans.

The suit says Richard and Melissa responded to a 911 call at the Evans’ residence and took the minor child into their custody and placed her at their residence. Richard, as a officer and employee of Mahaska County, “acting within the scope of his employment duties,” and Melissa “continued the removal and concealment of Ashley” until she was returned to the custody of her father by order of court.

The lawsuit states damage to the plaintiffs include unjust imprisonment and the deprivation of the plaintiff’s fundamental civil rights; humiliation, embarrassment and severe mental and emotional distress; expenses incurred in defending said guardianship petition and exposure to public hatred, contempt and ridicule.

Email ThisBlogThis!Share to TwitterShare to FacebookShare to Pinterest
Labels: Iowa

Vandre Johnson wanted to vote — but there was a problem. Johnson had suffered a brain injury in a 1991 car accident and was declared a ward of the Baltimore City Department of Social Services in 2004.

Under state election law, if you are “under guardianship for mental disability,” you cannot vote, regardless of your capacity to cast a ballot or even a judge’s determination that you have that specific capacity.

Lauren Young, director of litigation at the Maryland Disability Law Center, and other lawyers at the MDLC confronted the dilemma in Johnson’s case after he indicated to his mother that he wanted to vote.

On the morning of Oct. 14, the last day to register, Johnson and his lawyers appeared before Baltimore City Circuit Judge Althea M. Handy to get his guardianship terminated. The Department of Social Services had joined the petition ahead of time, and Handy granted it.

Johnson was able to vote from Ravenwood Nursing Home and Rehabilitation Center, where he lives, by absentee ballot.

Young: "It’s a nice story for him." But many other state residents with guardians cannot shed the legal supervisors of their personal affairs. "Terminating Johnson’s guardianship entirely was the most expedient solution for all parties involved in that case, the law must be changed to prevent future injustice."

Maryland is among a minority of states nationwide that make voting conditional upon mental competence, a policy advocates for the disabled say is unconstitutionally overbroad.

In 2001, a federal judge in Maine found that state’s ban on voting by individuals under guardianship by reason of mental illness violated procedural due process, the Equal Protection Clause, and the Americans with Disabilities Act.
Full Article and Source:
Disability rights groups say disenfranchisement of wards goes too far

A young man’s suspicious death over a year ago while he was under the care of Adult Protective Services and The Health Center at Standifer Place is expected to be ruled a homicide.

Robert A. Young, a 33-year-old ward of the state who suffered from cerebral palsy, died as a result of “blunt force trauma to the head.”

Family members of Mr. Young filed a $35 million lawsuit against Standifer Place alleging that not only did an employee kill him, but that other employees didn’t even tell family members he was dead when they would call to check up on him.

Adult Protective Services, the state agency that had legal guardianship of Mr. Young, also did not respond to repeated attempts to find any of Mr. Young’s family members. Instead the agency simply made arrangements for Mr. Young to be buried in a pauper’s grave.

Full Article and Source:
Chattanooga: Man's death at nursing home expected to be ruled a homicide

Attorney Ronald K. Nevin served as the public guardian in Davidson County. As public guardian, he managed the financial and personal affairs of people under conservatorships or guardianships.

A Petition for Discipline against Ronald K. Nevin was filed, Nevin appealed, and the disciplinary order was upheld by the Supreme Court.

The Rules of Judicial Administration Committee has filed with the Florida Supreme Court a report and proposed amendments to rule 2.420, Public Access to Judicial Branch Records, addressing the sealing of circuit and county court records in criminal cases.

The court invites all interested persons to comment on the proposed amendments, which are available online here.

An original and nine paper copies of all comments must be filed with the court on or before January 15, 2009, with a certificate of service verifying that a copy has been served on the address below, as well as a separate request for oral argument if the person filing the comment wishes to participate in oral argument, which may be scheduled in this case:

The committee chair has until March 16, 2009, to file a response to any comments filed with the court.

See also:
Panel offers rules on which court records should be available online

In Re: Sealing of Court Records and Dockets
Posted by NASGA 3 comments:

2008: "Guardian Cheated Clients" in a political ad for congress.


2001: Fran Lang, who pleaded guilty to scheming to defraud elderly people under her guardianship, is sentenced to 15 years probation and 1,600 hours of menial labor.
Ex-guardian gets probation