NASGA's California Advocacy Liaison, Linda Kincaid, makes her eighth appearance in front of the Santa County County Board of Supervisors to advocate on behalf of Gisela Riordan and other conservatees under the control of the Santa Clara County Public Guardian. Source: YouTube:NASGA's Advocacy Liaison, Linda Kincaid, on Gisela Riordan & the Santa Clara County Public Guardian
Posted by NASGA 11 comments:

Gisela Riordan: "I pray every night for God to take me.." 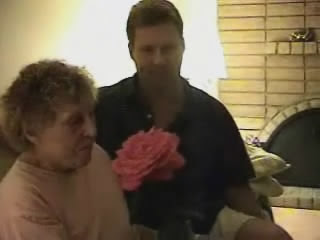 Gisela was an active vibrant woman, adored by her allergy patients at Kaiser Permanente. Known as the most gentle allergy technician, patients insisted Gisela be the one to administer their treatments.

Gisela was deeply in love with Eraldo, her companion of seventeen years. They traveled the world together until his death in 2007. Gisela moved back into her San Jose home where she raised her two children. Gisela’s son completely updated the home, and the two shared the home comfortably for several years.

The PG imprisoned and isolated Gisela at Villa Fontana, a San Jose residential care facility that turns a blind eye to elder abuse and neglect. For over two years, Gisela has been denied nearly all contact with the outside world. The PG and Villa Fontana denied Gisela some of her most basic personal rights and dignity.

Sobbing about missing her children, Gisela told an unauthorized visitor in April 2012, “I pray every night for God to take me”. Gisela’s world is dark, silent, and very lonely.

Documents filed in the United States District Court for the District of Columbia reveal that Holly Fujie of Los Angeles allegedly engaged in predicate acts of racketeering through and by means of money laundering, mail and bank fraud, as well as conversion of funds.

Both Holly Fujie and Eric George were directors of Bet Tzedek, an entity which obtained millions of dollars from the various trusts funds maintained and operated by the State Bar of California, as well as funds from the California Bar Foundation, where Holly Fujie presently serves as the vice-president.

James R Graham, over-medicated at Sheridan Care Center at Sheridan, Oregon with his wife of 55 years; Joyce Graham visiting him. This is the video Joyce's lawyer, David Cramer should have secured to support her Petition for Guardianship which she neither of them should have had to do as man and wife. Source: James R. Graham and wife Joyce after he was kidnapped by Adult Protective Services
Posted by NASGA 6 comments:

Partisan Judicial Elections and the Distorting Influence of Campaign Cash

Today the Center for American Progress released “Partisan Judicial Elections and the Distorting Influence of Campaign Cash,” showing that the eight states that still elect or nominate judicial candidates in partisan races—Alabama, Illinois, Louisiana, Pennsylvania, Texas, West Virginia, Ohio, and Michigan—all rank among the top 10 in total judicial campaign contributions. As the amount of money has increased, these states have seen more divisiveness and partisanship reflected in the justices’ votes. The problem could be spreading, as state parties are now intervening at an unprecedented level in judicial races in two states—Montana and Florida—that have nonpartisan elections.

“As voters across the country go to the polls and are asked to vote for judges just like any other political candidate for president or the legislature, you have to stop and think about how it’s possible that judges can be impartial and fair to everyone if they are elected in partisan elections and funded by special interests,” said Andrew Blotky, Director of CAP’s Legal Progress Program.

SAN JOSE -- A former high-ranking Santa Clara County medical administrator has been accused of trading prescriptions for powerful drugs such as Oxycontin in return for cash and methamphetamine, according to the Santa Clara County District Attorney's Office.

Dr. Marvin Bonham, until recently the medical director of the Valley Health Plan, Health and Hospital System of Santa Clara County, was charged Tuesday with 18 felonies stemming from allegations that he wrote prescriptions for county residents who have criminal drug histories.

A woman whose lawyer misappropriated most of the $100,000 she was supposed to get in a probate case has had her day in court and was teary-eyed after a $867,000 jury verdict Monday in Bexar County, Texas.

“I am very pleased. The jury believed in me," Isabel Sloan told the San Antonio Express-News.

The award includes $377,000 against now-disbarred attorney Eric Turton, who gave Sloan $25,000 of a $100,000 probate settlement she was supposed to get and admittedly kept the rest, as well as another attorney, Oscar C. Gonzalez, who referred her to Turton. An additional $200,000 was awarded against Gonzalez and his law firm, plus the verdict includes attorney's fees for Kolb of a little over $290,000.

Although Gonzalez contended that he had simply referred Sloan to Turton, who had rented office space from him, Sloan contended that Gonzalez should have known Turton had a history of disciplinary issues and took a $2,500 retainer. Turton testified that Gonzalez referred cases to him and got a portion of the attorney's fees. Testimony at trial also showed that some of Sloan's money went to pay law office rent, the article says.

The jury found both lawyers responsible for a $75,000 misappropriation and fraud and additionally held Gonzalez and his firm liable for false, misleading and deceptive acts and practices and gross negligence.

Full Article and Source:
Ex-Client Awarded $867K Against Lawyer Who Stole $75K and Law Firm That Referred Her to Him
Posted by NASGA 2 comments:

Email ThisBlogThis!Share to TwitterShare to FacebookShare to Pinterest
Labels: Misappropriation of Funds, Texas


U.S. District Judge , an native appointed by President , gave the disbarred lawyer more than what prosecutors requested for his crime as the mastermind of biggest financial fraud.
"I am truly and deeply sorry for what I have done," Rothstein said, addressing the court wearing cuffs on his wrists and ankles. "I don't expect your forgiveness."

Danielle Murphy is a mildly autistic disabled adult. She lived with her aunt, Nancy Vallone, in Arizona. Nancy provided the best of care and medical treatment for Danielle.  After Danielle was diagnosed with Fragile X Syndrome, Nancy moved to Ohio so Danielle could receive treatment from a top clinic in Cincinnati. Shortly after the move, the Ohio’s Advocacy and Protective Services Agency (APSI) took control of Danielle’s case. They placed Danielle in a group home where she has been physically and sexually abused.  APSI denies Danielle the treatment that Nancy moved to Ohio to receive.

Worst of all, APSI isolates Danielle from receiving any visitors, including her Aunt Nancy.

An Edina woman convicted of stealing money while working as a court-appointed guardian and conservator for vulnerable adults has been sentenced to a year in jail.

Terri Ann Hauge, 57, is already serving a 270-day sentence in Hennepin County for stealing from an estate she oversaw. On Sept. 14, a Rice County judge sentenced her to 365 days in jail for convictions of perjury and theft by swindle related to cases she handled. She was also ordered to pay restitution and do 240 hours of community service.

Keeping the 'Mentally Incompetent' From Voting

Roberta Blomster, 37, lives in a suburb with her parents and sister outside of St. Paul, MN, where she interns with Congressman Keith Ellison's campaign and testifies at her state capital on behalf of people with disabilities. During her free time she knits and spends time with her family and their two dogs.

Doctors have diagnosed her with mild mental retardation and epilepsy, and she is under limited guardianship, meaning that her mother manages her health and financial decisions.

The decision about whether to vote, however, is hers alone -- a reality that might be different if she lived in another state. She gets her news from the local paper, television and social media. "It feels wonderful knowing that I'm able to make informed decisions about who I'm voting for," she says. "It's a very satisfying feeling knowing that you're making a difference."