The Schiavo case alerted America to abuse of power by the courts, and to the need for advance directives. But in today’s corrupt courts, even duly executed advance directives can be disregarded - when there is a lot of money to be made by the judge’s pals. The feeding frenzy has reached epidemic proportions around the country.

Over the years, a growing uncaring and unjust judicial system has helped convert guardianship/conservatorship from an appropriate law to one which, if misused, is damaging to the general public.

At present, it operates to ensnare the most vulnerable people in a larger and larger trawling net, now including those merely physically “incapacitated”! It has become a feeding trough for unethical lawyers and other “fiduciaries” appointed by the courts to protect, but many of whom become nothing more than predators.

Wards, instead of being protected by the system, are victimized by it, losing their freedom, property and their very lives, due to a lack of monitoring by the individual judges and court administrators, and further lack of oversight of the courts by state and federal legislatures.

Uncaring and corrupt judges misuse the law and engage in blatant due process, civil/human rights violations. Victims aren’t always given notice of hearings at which they will be judged, aren’t always allowed to attend, and often don’t have lawyers. If the court does appoint lawyers, often they are too closely affiliated with other professionals who make their living in these courts and cases and they don’t properly represent the victims’ interests. Corrupt judges do not apply the required evidentiary standards in making adjudications of incompetency.

Homes are sold to insiders at below market! Contents - family heirlooms, jewelry, photographs, etc., - disappear, either stolen outright or sold at auction. Estate assets are rapidly paid out to the fiduciaries in exorbitant “fees” and “commissions” until there is nothing left!

“Fiduciaries” are given power of life and death, burying their wards in nursing homes where they are kept chemically restrained with unnecessary and dangerous drugs; family members are denied any say in their care, and sometimes denied visitation, except under guard at their own expense!

Written by a NASGA member.
Posted by NASGA 2 comments:

Connecticut: two people accused of depriving a 23-month old toddler of fluids for at least a week as a punishment for bed wetting were charged with manslaughter, cruelty to persons and a risk of injury to a minor after the child’s death was ruled a homicide.

Texas: a Houston mother was arrested and charged with felony murder in the death her child, accused of failing to provide adequate nutrition and hydration to her blind five-year-old son.

New York: a 47-year-old Albany woman was indicted by a grand jury on charges of second degree manslaughter, criminally negligent homicide and endangering the welfare of a vulnerable elderly person for not caring for her 78-year-old mother or providing proper sustenance, starving her to death. If convicted she faces up to 15 years in prison.

Michigan: Jack “Dr. Death” Kevorkian, was convicted in April 1999 of second degree murder in connection with the 1998 euthanasia death of Thomas Youk, 52, who was afflicted with Lou Gehrig’s disease.

Mississippi: a wrongful death lawsuit was filed in 2006 in U.S. District Court against a nursing home for allegedly causing the death of a 74-year old resident by dehydration after the facility “consistently” failed to provide her with sufficient fluids.

Florida: they give awards to judges who order the death of the disabled and laud the person who fought a disabled woman’s family for more than 10 years in his quest to kill her and who lied on his guardianship application as “guardian of the year”.

Full Article and Source:
Death By Dehydration Is Murder
Posted by NASGA 2 comments:

Lauren struggled with substance abuse but had been clean for ten months. On August 28, 2006, she overdosed on heroin, resulting in damage to her brain due to oxygen deprivation.

Because Lauren’s parents knew that she wanted to give birth to her child, they agreed on medical treatment of Lauren during her pregnancy.

Lauren’s daughter Ember Grace was born in February 2007, and she is a healthy little girl.

After Ember’s birth, Lauren was taken off a ventilator and tracheotomy and much to the surprise of her doctors, she began breathing on her own.

It was at this time that Lauren’s father, Randy Richardson and mother, Edith Towers, disagreed on Lauren’s treatment plan, ultimately leading to cross-petitions for guardianship.

Mrs. Towers wants to stop Lauren’s tube feeding, which would lead to her death, because she personally believes that Lauren would not want to live in her condition.

Mr. Richardson wants to continue ordinary care for Lauren like tube feeding, basic medications, and cleanliness, but not extraordinary care.

Lauren’s father, Randy Richardson, is fighting this ruling and has currently filed a Notice of Exceptions, a Motion for Trial and Hearing, and a motion for further medical evaluation of Lauren.

Randy believes that Lauren was hopeful and would not want to be starved and dehydrated.

Randy and a local neurologist believe Lauren is showing signs of consciousness beyond PVS.

Randy has been told that with therapy Lauren may be able to learn to eat without a tube, continue to improve, and recognize visitors, including her daughter.

Randy is asking the Court to award him guardianship of Lauren so that he can take her home, love and care for her as any father would.

In Search of Justice for Lauren

Email ThisBlogThis!Share to TwitterShare to FacebookShare to Pinterest
Labels: Delaware

A car accident left Robert Wendland in a coma. Seventeen months later, he came out of the coma, but had been what experts describe as minimally conscious.

Later, Robert Wendland could recognize some people and follow certain instructions, his mother Florence said. His wife Rose said her husband, who gets his nourishment through a tube, is a shell of his former self.

Rose wanted the tube removed so her husband could die. Florence wanted it to stay.

Robert's fate was in the hands of the California Supreme Court.

The California Supreme Court decided that a court-appointed conservator cannot order feeding tubes to be pulled from a conscious yet "incompetent" patient, without that patients own formal instructions.
Conservatorship of the Person of Robert Wendland

In the year since lawyer James Gocker became guardian for incapacitated real estate mogul Max Farash, a team of lawyers, accountants and other professionals has been employed at a cost of more than $1 million.

Now the judge overseeing the Farash case is telling Gocker not to bring in any more help without prior court approval.

In a letter to Gocker's attorney, acting Supreme Court Justice Edmund A. Calvaruso said all appointments of people who provide services to Gocker must be made by the court.

"The court will make new appointments or ratify existing appointment contracts only if such appointments are both financially responsible and professionally sound." 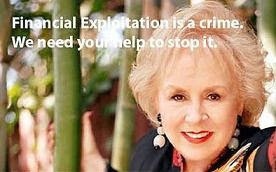 Emmy Award-winning actress Doris Roberts, best known for her role as nosy Marie Barone in TV’s Everybody Loves Raymond, narrates a video about how to stop Adult Financial Exploitation.

Financial exploitation of the elderly and disabled is a crime. It costs millions of dollars nationwide and destroys thousands of Missouri lives. The Missouri Department of Health and Senior Services (DHSS) has launched a program called MOSAFE-- Missourians Stopping Adult Financial Exploitation--to combat it. Financial exploitation occurs when someone illegally uses another person’s money or property for profit or gain.

MOSAFE educates financial institutions and you, as a consumer, on how to stop attempted or ongoing financial exploitation before a senior or disabled adult’s funds are depleted.