A woman was arrested for kidnapping after taking her son home.

The mother does not have custody of her 6 year old son, but was allowed to spend the night and visit with him at the home of his grandmother, who has guardianship of the boy.

The boy and his mother were reportedly still sleeping when the grandmother left the house but gone when she returned. The grandmother called the County Sheriff's Department, and deputies located mother and child at her home.

The mother was arrested and booked for kidnapping. The boy was returned to the custody of his grandmother.

An elderly couple who fell in love and eloped while living in a nursing home had their marriage annulled yesterday despite their pleas to remain wed. A Vista Superior Court commissioner ruled that the two-year-old marriage was invalid, agreeing with the man's sons that he wasn't mentally competent to consent to marriage.

Herbert Woodward II, 88, and Wani Bielinski, 86, wanted to stay married. Woodward's family filed the case to annul the marriage, saying he wasn't acting in his best interest, and that the family trust needed to be protected.

Bielinski and Woodward were not in the courtroom and were told of the ruling by family members. Bielinski said she and Woodward are shocked and angered by the decision.

Woodward's family, which has legal guardianship and conservatorship over him, instructed the nursing home not to allow him to speak to the media.

A government report found extensive problems in America's nursing homes. According to the study, nearly one in five of the nearly 15,000 nursing homes examined were cited for violations that put patients in immediate harm in 2007. A total of 92 percent were cited for some type of deficiencies during each of the last three years.

From treating bed sores to preventing urinary tract infections, the quality of care in nursing homes was usually the focus of those deficiencies, the report found. Experts also found that on a typical day, far too many residents waited too long to get the help they needed.

Wes Bledsoe, founder of A Perfect Cause, a non-profit group that advocates for the reform in long-term care said: "Very few of these deficiencies ever result in a financial penalty, And if they do, they are not collected. The system has no teeth."

The Department of Health and Human Services' Office of the Inspector General issued new voluntary guidelines to help nursing homes improve the quality of their care. According to HHS, the guidelines will address staffing issues, the management of medications and resident safety, among several other concerns.

Waterbury officials are expanding a program that requires the parents of chronically truant public school students to appear before a probate judge.

Brunnock saw the parents of 87 students from the Walsh and Chase elementary schools. Under the program, he had the power to order a variety of remedies for the truancy, including extra tutoring, parenting classes, counseling, and drug rehabilitation. Parents who do not comply with his orders can have their guardianship challenged in court.

In response to the Sept. 16 editorial "Keeping Kids In School":

Waterbury is trying to find a remedy to the problem of truancy. The city and The Courant seem to believe the answer is to send parents before a probate judge. The judge in these cases has been ordering parents to go to parenting classes, among other orders. This seems, of course, to be in the best interest of the child. However, it does not seem to be in the interest of civil rights and liberties.

In the absence of a crime, I do not see how any judge can deprive a citizen of his personal liberty. Ordering a person to go to classes is such a deprivation.

I ask Probate Judge Thomas Brunnock how he can deprive people of their liberties? Has Mr. Brunnock perused the Constitution's Bill of Rights. If so, he must not have read the Civil War Amendments.

District Attorney Gerry Leone has announced that the former Middlesex County Register of Probate has been indicted in connection with his alleged theft of public monies.

John R. Buonomo was indicted by a Middlesex County Grand Jury on charges of breaking and entering into a depository with intent to commit a larceny (12 counts), theft of public property by a city/town/county officer (eight counts), and larceny under $250 (eight counts). An arraignment date has not yet been set.

Previously, Buonomo was arrested by State Police assigned to the Middlesex District Attorney’s PACT Unit. It is alleged that Buonomo, a then county-wide elected official, engaged in a repeated pattern of stealing cash and coins from copy and money machines at the Office of the Register of Deeds over a period of weeks.

Video surveillance cameras installed by the PACT Unit captured the defendant engaged in these acts numerous times during the months of June, July, and August.

Email ThisBlogThis!Share to TwitterShare to FacebookShare to Pinterest
Labels: Massachusetts

Illinois Guardianship Law Similar to Slavery-Law Should Be Stricken as Vague, Prohibiting Too Much Speech and Too Discriminatory by James Timothy Struck

Abstract:
All persons are potentially enslaved by guardianship law. Illinois residents have no federal rights in federal court under guardianship. Probate law In Illinois should be stricken as vague, indeterminate, and too discriminatory for those who see it that way. Possible case law examples regarding Judith Resnick and Michael Jordan are given. Rights violations severe under guardianship. Probate and guardianship law meets US v Williams standards to be stricken as vague. Residents of Illinois under guardianship do not have rights to avoid smoke in nursing homes, phone family, visit family, consent to treatment, see medical records, avoid death threats from facilities, have family go to church, be able to come home, be able to go to zoos or museums, not be threatened with jail when determining location of family, get caregiving bills reimbursed for care of elderly or disabled person. Government employees taxing corporations involved in harmful things, such as alcohol, tobacco, missiles, guns and weapons associated with deaths, could also be enslaved by this process as well.
Posted by NASGA 2 comments:

The King of Probate 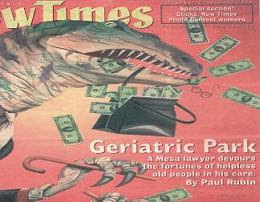 􀂄 No exemption for trust departments

􀂄 Problem: No funding for legislation

Legg and Mackey had access to Delores Reichwein's money because in the late 1980s, the Reichweins had joined the 500,000 elderly Americans who are "wards" of a court. Because of advanced age or other incapacity, wards are compelled to turn their financial affairs over to a guardian-conservator, usually a family member or a court-appointed private fiduciary. Wards are among society's most vulnerable citizens.
AS HELPLESS AS CHILDREN - A PROMINENT MESA LAWYER AND HIS FLUNKY WERE SUPPOSED TO PROTECT THE ELDERLY IN THEIR CARE. INSTEAD, THEY PLUNDERED THE OLD PEOPLE'S ASSETS

Abuses by attorneys and private fiduciaries such as Wayne Legg, Webber Mackey and others have led to proposed changes in how the Maricopa County Probate Court operates.
THE FORGOTTEN COURT

A New Times investigation of Legg and Mackey, published in September (As Helpless As Children"), uncovered a pattern of fiscal abuses that cost Cinthia Gannett's deceased grandmother, Grace Gannett, and more than two dozen East Valley senior citizens and their heirs untold dollars and grief.
HEIR OF OPTIMISM - RELATIVES OF SENIORS WHOSE ESTATES WERE PLUNDERED HOPE FOR JUSTICE

The multicount felony arrests of Legg and Mackey marked a high point in the AG's oft-trumpeted war against elder abuse. But endless pretrial delays in the criminal case left family and friends of the victims frustrated and confused. And that was before the death last week of the 79-year-old defendant Mackey, universally considered to be Legg's subordinate in the lucrative scheme.
Death of a Defendant - 21 months after being charged with looting the estates of elderly Arizonans, one defendant dies. The other awaits trial

Bonding companies are expected to cut checks totaling about $800,000 to the heirs of 14 estates that were plundered by Mesa attorney Wayne Elmer Legg and his sidekick, Webber Mackey. The pair ran those estates and others into the ground while siphoning off enormous fees for themselves over a period of several years.
PROBAYE'S REPROBATES - SOME PLUNDERED ESTATES WIN COMPENSATION, BUT CRIMINAL CASE FACES DELAYS

Prosecutors from the Arizona Attorney General's Office portrayed Legg as a vulture who stole more than $1 million from senior citizens in a scheme hatched with the late Webber Mackey, a private fiduciary who died in 1995 before facing his own criminal trial.
Barrister Behind Bars - Former "King of Probate" faces long prison term for ripping off elderly

"Wayne Legg was after my friend's $5 million just as he was after those other people's money," said Lindberg, who neither sought nor received any of Davis' estate. "Right at the end, Ellen knew that Legg was not to be trusted, and she thought she'd done something wrong by dealing with him. It was pathetic. He was like an animal, just dying to suck her bank account dry. I wanted to be in the courtroom to watch for my friend."
A Lawyer on Trial - Wayne Legg, a prominent attorney charged with stealing from elderly clients, faces his accusers