"A judge shall not allow any relationship to influence judicial conduct or judgment. A judge shall not lend the prestige of judicial office to advance the private interests of the judge or others."
–Texas Code of Judicial Conduct, Canon 2, Section B 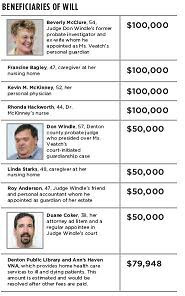 In eight lawyerly canons, the Texas Code of Judicial Conduct outlines basic ethical guidelines for our state's judges, from justices of the peace to justices on our highest courts. That includes Denton County Probate Court Judge Don Windle, although he apparently doesn't see it that way. His disregard of these standards is breathtaking.
Source: A Broken Trust: Denton County judge fails another ethics test

Denton County Probate Judge Don Windle relies on a small circle of professionals - several with ties to him and to one another - for key appointments and services in his court.
Source: A closer look at probate

People appointed by probate court turn up on woman's will - Probate Court Judge Don Windle immediately placed both sisters under court-appointed guardianships, moved them to a Denton nursing home and restricted access to them. By early 2002, Veatch was rewriting her will — which had not been updated since 1960 — with the help of her court-appointed guardians and attorney.
Source: Concerns arise over guardians

See also: Beneficiaries of will

It is in the administration of such guardianships that Judge Windle has failed, and he has failed spectacularly. After a series of revealing newspaper reports, the State Commission on Judicial Conduct officially chastised him in September for a system of appointing guardians and trustees that seem to inordinately reward close friends, business associates and even his own former wife. The same small group kept being appointed to important and sometimes lucrative positions as guardians, and the commission came to the conclusion that the practice was beyond the pale of permissible judicial action. It issued an official reprimand, the strongest action at its disposal.

A case during the same period reviewed by the commission in which a court-appointed guardian (the judge’s former wife), a court-appointed attorney, the guardian of the estate and the judge himself were bequeathed almost a third of the estate of an elderly woman who had been declared incompetent by Judge Windle three years before.
Source: Time for Don Windle to leave the bench

Denton County's probate judge compromised his impartiality by using his judicial office to advance the interests of one of his former investigators, whom he married, and a former Denton school board president who is his business partner, the State Commission on Judicial Conduct has ruled.
Source: Judge compromised impartiality, panel says

The commission found that Windle used his office and his influence to help win a contract for his former wife to provide services in guardianship cases, and that he appointed a friend and business associate to a paid position on a panel that hears disputes over eminent domain cases. The commission also ruled that Windle had provided “false and misleading information” while it was conducting its investigation.
Source: Time overtakes the good ol' boys

Beverly McClure is a registered with Center for Guardianship Certification

All of the people mentioned in the Veatch sisters case has been involved in or was contacted by me (Kim, JP and Doris Manire' daughter-in-law). The ones Terry Hammond mostly told me that since the court is involved, my in-laws would be taken care of.

The only ones who were taken care of is the pockets of the judge's friends, that would be his exwife, his personal CPA, the attorney who handled his and his ex's divorce as well as his exwife's business. Oh yes her company was funded by the county as well as the UNITED WAY, which the CPA was on the board of directors, as well as on the board of her business.