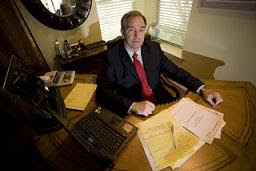 James Locke fought for the rights of elderly and disabled people to be free from abuse by court-appointed conservators, and for that he was fired by Sacramento Superior Court, he claims in federal and state lawsuits.

Locke started in May 2001 as an investigator for Probate Court. With excellent performance reviews, he rose through the ranks and became probate manager. He was terminated without an administrative hearing May 7, in violation of his rights under federal and state laws and the U.S. Constitution's guarantee of due process, according to the suits, filed by lawyer Stewart Katz.

The suit alleges it was retaliation by the Superior Court and its executive staff for Locke's persistent, outspoken and constitutionally protected advocacy of needed improvements to the court's legally mandated oversight of conservatorships.

Locke said in an interview: "I never quit harping on it."

Locke recalled that his role as a whistle-blower, not appreciated by the executive staff, came to a head when Assemblyman Dave Jones, D-Sacramento, contacted probate's then-supervising judge. Jones cited Locke's testimony before a judicial panel and expressed concern that the court was not in compliance with the law.

Locke said: Judge Jerilyn Borack told him "You're dead," after her January 2007 conversation with the assemblyman.

Thank you, Mr. Locke! Good can only prevail over evil when honest people speak out!

This is the reason that ELDER ABUSE is not getting the exposure it should. There is no "OVERSITE" at any stage of the system, the local, the state, the federal, the supreme levels, all let it go and don't help the victims they are supposed to be "PROTECTING AND PRESERVING."

This is the reason that good honest attorneys and the media will not step up to help, because the courts and their friends are taking advantage of the laws and the way they are written, our elderly are not getting TRUE DUE PROCESS.

The family and friends are always disquallified from being made guardians/conservetors and not allowed to care for their loved one. The media and reporters are being shut down and told to stop articles on the courts and their appointed "care givers."

This is abuse to America, dealt by the system that is suppose to PROTECT AMERICA. Do you want to be treated like this?

Thank you for the James Locke story and the facts surrounding his dismissal as Probate Manager of the Sacramento Superior Court.

Victims of unlawful and abusive guardianships, know all too well about the "Probate Nightmare."

It is very heartening to learn that an official is willing to tell the truth, and the judge's warning to Locke - "You're dead!" - is no surprise or shocker, when you know the truth about the judicial system.

The problem is much larger than what you have revealed in CA. And as each of us has sadly learned, there is no justice available to individuals without a media spotlight!

It will get worse before it gets better, because reform can never come from within, and the Baby Boomers will be the next victim group!

Although guardianship laws are being abused every day in America, it seems that California is one of the worst offenders.

While I am thankful that Mr. Locke was one candle in the darkness, I am saddened by the fact that his light was snuffed out so easily.

We have been pleading for the powers to be to stand up and do what is right, but apparently, when they do, they get fired for their honesty.

If this doesn't make citizens sit up and take notice that there is corruption in the guardianship courts, I don't know what will.

Thank you Mr. Locke for your bravery and your courage to speak the truth and blow the whistle on the abusers.

My own close relative has been used and abused by the Probate System in Connecticut.

Thank you for the prompt response. I'm not sure if my mother is on my side since she feels that my sister-in-law pushed her and caused mom to break her hip. I don't believe it ever happened, the court did not have any evidence to the fact, and the judge suggested I either resign or be removed as Conservator. These turn of events happened in a very short period of time.

One of the reasons I became Conservator was to prevent mom from "going crazy" with credit cards, avoid her constant weekly visits to several doctors due to hypochondria, and avoid her spending on excessive amounts of money on make-up, clothes and eating out.

My father passed away in 2001, and, while I don't blame my mother for his death, I due believe that the financial and emotional stress that she caused him may have assisted the cancer in metastisizing throughout his body. Also, the family dog, who wasn't that old, was found hanging in the garage from a rope a year after my father's death. Mom, in my opinion, was incapable of caring for herself or anyone else. Now, my only sibling is living in a group home due to mom's history of neglect towards her and failing to be a true role model.

Long ago, my father gave me the advice to leave the family house as soon as I was able and to never look back. I just couldn't do that to the family. The probate court has recently taken my mother from the house where I reside, and left her to rot in assisted living with people 20-30 years beyond her age. When she was living with me and my wife, she seemed happy, was involved in many family events and trips, worked for the first time since my father's death and dated.

I don't know if she got the probate court involved to seek revenge against me and my new family (I was re-married in April) or if the probate system itself sought out my mother thinking she was or is worth millions (which is not the case). My mother told me several times before I married in April that she believed I would leave her all alone. This was not going to happen, as I reassured her several times.

I have spoken to mom a few times since she's been moved into assisted living, and she doesn't seem that happy. I don't want her back in my home since she may cry abuse again. Also, I don't want the scrutiny associated with being a conservator. I just can't understand why mom couldn't have remained in the area where my wife and I live. The judge indicated that mom desired to move closer to my grandmother, sister and her brother in another part of Connecticut.

My wife and I objected since she has always been afraid of her brother, he has written several abusive letters that were sent to my home; causing my mother's mental condition to worsen during those times. He has also called to my home on occassion to yell at mom. My grandmother is over 90 and, doesn't need the aggravation my mother will cause her. Also, my sister has to mature and grow. She has her own mental problems, and through a mental health worker that has helped mom and my sister in the past, it was written and suggested they be separated if there is any chance of my only sibling to have a normal life.

What the probate court has created is a complete mess, and, in my opinion, ruined the lives of both my mother and sister. The reason for bringing my mother to the area and leaving my sister in the family home, was to separate them as was suggested by the professionals. Also, the family home was in disrepair/deplorable shape.

My family provided a safe and loving environment which can be substantiated by family friends. I feel that my family name and that of my wife has been completely defamed in the area and that we may have to eventually leave due to the humiliating, horrific experience of this past year. Some level of justice must be reached since my father's estate is being pillaged by the legal vultures in this community. THE MOST IRONIC THING IS THAT I HAVE LETTERS AND RECORDINGS OF MY MOTHER INDICATING SHE NEVER WANTED THE ASSETS OF HER ESTATE TO BE DEPLETED, AND, SUPPOSEDLY, THE SOCIAL WORKERS AND ATTORNEYS HAVE EITHER GIVEN HER WRONG INFORMATION OR NONE AT ALL!!!!!!

As a side note, at the probate court (first hearing), I indicated that since my father sending mom to a psychiatrist for 30+ years did not seem to help, my and my new family were trying a different approach which consisted of a better diet, exercise and nutritional supplements. He didn't seem very happy with this comment. I'm sorry but I don't believe that a judge can push his views on others. Also, we were in the process of looking into possible short-term mental treatment for her upon the completion of hip surgery/therapy. The court system did not seem to care.

Any advice/direction you can provide would be appreciated.