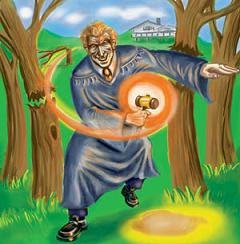 "Judge Peter “Chainsaw” McBrien won’t allow SN&R to photograph him, so we’re forced to run this rather unflattering illustration yet again." Illustration by Christopher Hayes, Sacramento News and Review

The grounds for the proposed recall are as follows:

Judge McBrien is a disgrace to the American judiciary system and an extreme danger to children, petitioners and respondents.

McBrien destroyed a young boy by awarding the father custody after multiple investigations substantiated he had sexually abused the boy.

McBrien destroyed trees on public property to improve the view from his home. Charged with a felony, he pleaded guilty to a misdemeanor.

After receiving a public reprimand from the Commission on Judicial Performance, he was promoted to the position of family court presiding judge.

McBrien has now embarrassed his profession by abandoning a trial in mid-session. McBrien issued a judgment destroying the respondent’s real estate holdings and financial stability.

Respondent filed an appeal. McBrien obtained, in secrecy, a copy of the court transcripts, altered them and had the respondent’s career destroyed.

McBrien has broken at least two California Code of Judicial Ethics canons: A Judge Shall Avoid Impropriety and the Appearance of Impropriety in All of the Judge’s Activities and a Judge Shall Perform the Duties of Judicial Office Impartially and Diligently.

When will McBrien’s evil terrorism be stopped?

If you are a REGISTERED SACRAMENTO VOTER, please click here to print the petition form to recall Judge McBrien. Then sign your full name, and print your address where you are registered to vote. Please also get your REGISTERED SACRAMENTO VOTER friends, family, coworkers, acquaintances, and others to sign the petition, complete the declaration at the end, and mail the form back to us at: Recall Committee, P.O. Box 993, Fair Oaks, CA 95628-0993.

People, if you have recall power in your state, USE IT! That may be one of the few powers you have left!

I sent my name and address to the email in the article; don't know if my being an out of state resident will help but I sent it for whatever good it can do.

Obtain this Judge's photo via his ex-lawfirm and/or law school graduation; you can also hire a PI to get pics of him and/or local media.

This judge's conduct in the judicial system is despicable; I'm willing to bet his unethical conduct extends to his personal life as well. Hire a PI and have him/her do some investigative work on this abomination.

Why is it so difficult to near impossible to cleanse and rid the court system of obviously irreponsible and dangerous judges in a timely manner?

This judge is more than a disgrace; he is a danger to society and he is on the loose on the bench.

"After receiving a public reprimand from the Commission on Judicial Performance, he was promoted to the position of family court presiding judge."

Is this part of the crisis?

The individuals responsible for the weak, ineffective reprimand reward this particular judge with a promotion in family court!

Where is the accountability from these individuals for this ineffective decision?

"When will McBrien’s evil terrorism be stopped?"

When real ethical people with moral character not connected to the lawyers and judges, replace the current buddy system are firmly placed in positions to reivew complaints and hand down just, meaningful punishments that fit the crime post haste.

Until there is real change, this is just a game played by the players in the loop.

Just like the judge on my case, it seems that this one has been in plenty of trouble and have numerous complaints on him the same as our judge. Just like our judge he gets to keep on makeing his buddies rich, and hurt innocent people.

There is no oversite, and there is no immunity for judges, what about the innocent peoples lives that these judges touch, shouldn't they count also?

Syliva said :"After receiving a public reprimand from the Commission on Judicial Performance, he was promoted to the position of family court presiding judge."

Well, the same has happened in our case the judge has been reprimanded and when I filed a complaint on him for the same thing, you won't belive what we were told.

We were told that : "although the judges actions were not nessecerly approiate, it is not a high enough rateing on our scale to reprimand him"

This makes me wonder who he paid off to be allowed to keep abusing people.

I think this is a very sad day for all judges.

I think a good beginning step that could be very effective, today immediately, to begin to fix the problems of bad judges who refuse to resign from the bench would be for all of the good judges to unite like a union (we have the Internet now, how hard to communicate is that?) and put very heavy pressure on the obviously bad judges to save grace and resign immediately.

If I were a good judge (and I do believe there are many good judges) I would be very angry at this guy who is worse than a criminal. I would want to unite with others against bad judges and get rid of them post haste.

This "judge" should be disbarred, his pension revoked, and he should be prosecuted.

I wonder if his Mother knows of his outrageous behavior?

I think of the hundreds of people who are forced to stand before him and be "judged" by a man of no ethic or conscious. Those poor people will slip through the cracks - collateral damage.