When attorney Larry Shafer walked into Probate Court at the Licking County Courthouse recently, he saw a first in his 30 years of practicing law: He was confronted with a will written on a piece of wood.

The last will and testament was written by Marilyn S. Rhodeback, of Johnstown, in 1996. 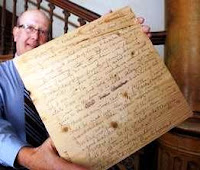 Rhodeback was living in Florida at the time, and her husband recently had died.

Her daughter, Debra McHugh-Clark, also of Johnstown, said her father had died without a will and Rhodeback knew she had to get her own affairs in order.

The closest thing she could grab was a piece of shelving, about 14 inches by 14 inches, that was left over from a shelf recently built for a microwave.

During the intervening the years, Rhodeback made changes to the document, dated it and had her sisters sign the final version earlier this year. Rhodeback, 73, died in her Johnstown home April 7.

But about 10 days before that, while she was in the hospital, Rhodeback called McHugh-Clark and asked her to bring the will to the hospital.

Obeying her instructions, McHugh-Clark went to the house, thinking her mother was talking about a dry erase board. She couldn't find what she was looking for and had to call her mother.

"Never in my wildest dreams did I think that an actual piece of wood was what she was talking about," McHugh-Clark said.

Email ThisBlogThis!Share to TwitterShare to FacebookShare to Pinterest
Labels: Ohio, Will

Clever way to avoid alteration.
Did she have the proper witnesses?