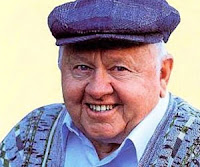 A Los Angeles judge has extended a restraining order Mickey Rooney obtained against his stepson through April, but says the actor must appear if he wants continued protection.

The judge ordered Christopher Aber to stay away from the veteran Hollywood actor until a hearing scheduled for April 5. City News Service reported Superior Court Judge Reva Goetz told Rooney's attorneys that the 90-year-old actor would have to come to court if he wanted the orders extended for three years.

A conservatorship has been established to protect the Oscar-nominated actor's money, which he claims have been mismanaged by Aber. Rooney has also accused his stepson of preventing him from leaving his home and verbally threatening him.

Rooney is scheduled to speak Wednesday to a U.S. Senate committee that is investigating elder abuse.

Poor man doesn't know what he's up against when he willingly goes to the fiduciary feasters to protect him.

You're right, Thelma. Mickey Rooney will soon learn another lesson, I am afraid.

Maybe not. All it can take when abuse/neglect/exploitation is exposed is one caring person in a position of responsibility and influence to begin to make a difference.

I know he's going to be testifying at the Senate Aging Committee today and I predict he'll be back in a few months to testify about guardianship.