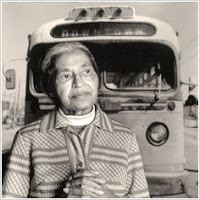 In a highly unusual move, a lawyer is suing a Wayne County probate judge and two court-appointed lawyers, accusing them of looting the estate of the late civil rights icon Rosa Parks.

Cohen also said Burton, through secret hearings and improper rulings, allowed the pair to concoct a bogus breach of confidentiality dispute. Cohen said Burton used the dispute to strip Elaine Steele and the Rosa and Raymond Parks Institute that she created with Parks of their share of Parks' property, said to be worth up to $8 million .

"Chase and Jefferson, together with Judge Burton, illegally, maliciously and wrongfully conspired... for the illegal purpose of raiding Mrs. Parks' estate of its value," Cohen said in a 38-page probate petition.

He requested a jury trial in probate court and asked Burton to remove himself from presiding over Parks' estate.

Burton declined to comment on the dispute, the latest twist in a long-running battle that began when Parks' nieces and nephews challenged the validity of her trust after her death in 2005. Chase and Jefferson didn't return calls seeking comment.

Email ThisBlogThis!Share to TwitterShare to FacebookShare to Pinterest
Labels: Celebrity, Michigan, Will

Sued the judge in his own court?
Shoulda gone to federal court!

Legal professionals profiting at an estate's expense even when the decedent has clearly expressed his or her wishes by means of a Will, trust and/or other legal document? What a surprise? And its all legal, because our Constitution gives them the right to deprive others of their property, their liberty and even their life by “due process of law”.

I am glad for the publicity this suit will get. We all know it won't be successful, but it educates people and maybe that's part of the reason it was filed.

What an embarrassment for the greedy ones!