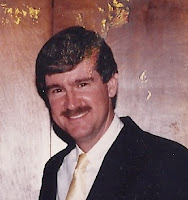 It was five years ago today that David E. Tate, Petitioner, along with notorious attorney Paul T. Housch, entered “Judge” Randy Kennedy’s court to conduct an “emergency” Ex Parte hearing “petitioning” the court for a conservatorship over brother John Daniel “Danny” Tate. With nothing but grossly perjured hearsay testimony, Kennedy “glad to do it” entered orders of conservatorship, administered the fiduciary oath to David E. Tate and ordered Danny Tate’s Vanguard account seized. 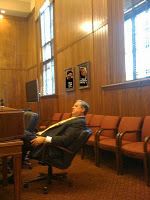 No evidence whatsoever was presented:
1. No medical evidence
2. No financial evidence
3. No crime(s)
4. No 911 reports
5. No complaints from the neighbors
6. NOTHING

Thinking of you all day, Danny....

They - David E. Tate, Paul T. Housh, and Judge Randy Kennedy - are all criminals in my book.

That judge teaches law?
What he did in the Tate case was completely unlawful!

"Impeachment is not good enough"
http://nasga-stopguardianabuse.blogspot.com/2010/11/impeachment-is-not-good-enough.html

Do not be deceived, God is not mocked; for whatever a man sows, this he will also reap.

five years? omg this is shocking and who actually benefited? who profited? this is a no brainer no need for danny tate to find himself stripped of all his rights his property his hard earned money i hope those who did this to him are condemned to eternal fires of hell for each day that the harm continues without any remorse or asking for forgiveness further shows the cover up and lies continue

Yes, they should all rot in hell.

I think they are all rotting in hell because they have to look at their ugly faces in the mirror each day.

Kennedy should be impeached. Don't forget to sign the petition!

I think it's important for people to know who might be reading this post and don't know the history, that there was no emergency. It was a lie. And they took that lie and built on it, until they'd eaten up all of Tate's assets. And they're still pursuing him.

It makes me sick to think of the little gathering and the planning to take everything Danny Tate had. I have watched the ex-parte hearing and Judge Randy Kennedy was having a great day at Danny Tate's expense.

I hear you Donnie there was no emergency, critical point, the rush to conserve was for David E Tate to seize Danny's assets and ruin his life . Many poor souls are guardianized and conserved via fraudulent petitions and no one does ***** about it so the abuse and misuse of the court system continues. Who is next? Voluteers? Anyone think this is a good system, step up and identify yourself.

.This is sickening, and I feel for Damny as I do for the victims of the Cook Couny Probate Court in Chicago.

It is truly sickening.