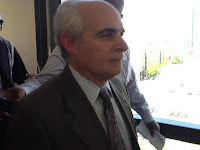 An Alameda County judge charged with stealing thousands of dollars from his Berkeley neighbor, selling her art, and using her garage to store his Thunderbird has resigned and agreed to never be a judge again.


Kathleen Ewins wrote in an email to NBC Bay Area on Thursday that her client, former Judge Paul Seeman, had resigned. He had a "distinguished career," she wrote and "he felt this was an appropriate action to take at this time for the good of the court."


Seeman resigned in exchange for the Commission on Judicial Performance halting its investigation into him, according to the Oakland Tribune.   The newspaper reported that he had remained on the bench - and continued to receive a paycheck - while his criminal case proceeded, though he had not appeared in court since his arrest.


Seeman was charged in June 2012 with one count of elder theft and 11 counts of perjury, all felonies, as well as enhancements alleging that he stole at least $200,000. This month, the Tribune reported that the District Attorney amended its complaint, charging Seeman with 20 additional crimes, for a total of 32 counts in all.


After a two-year investigation, Berkeley police said Seeman, who has overseen several Occupy Cal protester cases, started off as a neighbor who tried to help Anne Nutting and her frail husband, who were forced to leave their home.


Court records state that Seeman obtained power-of-attorney for the couple in 1999 after stating that he had found $1 million worth of stock certificates and uncashed dividend checks in their house.

Judges say corporations are persons;
judges are greedy, too!

Good riddance. And now we await the criminal case.

Judge Paul Seeman resigns and that stops the investigation?

Does that work the same with a bank robbery? If the robber just gives back the money, then the investigation stops?

Thanks for posting, NASGA.