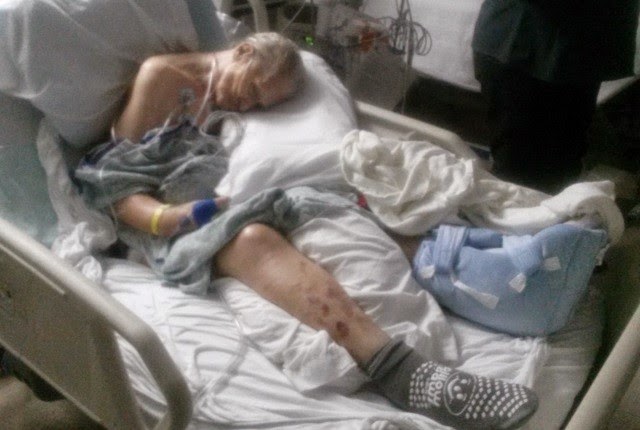 “My mom died 7 years ago. My grandma is the last piece of her I have left. I just want me and my kids to spend the time she has left with her.”

“My grandma calls out our names all day”

They say Rowan is barring Mrs. Rodman’s daughters, grand-children, and great-grandchildren from seeing  her in hospitals and nursing homes. Ms. Rodman is likely dying.

“When my mom called Qualicare she was told that my grandma is not allowed to have any visitors. My grandma is in her last days with end stage CHF and renal failure. My grandma calls out our names all day and we do not understand how [Mary] Rowan can ban our family when it is clearly not in my grandma’s best interest.”

Rowan told one family member that she herself has not seen Mrs. Rodman, although guardians are required to visit every three months. She was appointed Aug. 4, 2014.

Mrs. Rodman had just been released from Providence Hospital after various other placements in nursing homes and hospitals, and is now at Qualicare on E. Grand Blvd. in Detroit.

Mrs. Rodman’s granddaughter Amanda Ulmen was in tears as she discussed Rowan’s refusal to let her see her grandmother in the hospital. Since Rowan is listed as guardian in hospital records, hospital personnel must abide by her decisions.

“My mom died seven years ago,” Ulmen said. “My grandmother is the last piece of her that I have left. I just want me and my kids to spend what time she has left with her. Two of my aunts went to see her yesterday and were refused time with her also. This is heart-breaking, sickening, and outrageous.” (Continue reading)

She should be charged with elder abuse.

I agree, Finny. If a family member did this, that person would be in jail. But a guardian? They seem to have a license to abuse.

Wait a minute; the hospital does not have to abide by Rowan's decisions. Hospitals challenge family all the time, but they won't challenge a guardian?

No, sorry hospital, I'm not falling for that. You choose to stand by Rowan instead of challenging her.

You have to really start to ask why this Guardian isn't already under suspension, while an investigation is undertaken and perhaps its about time that the Department Of Justice gets involved in these cases with the full resources of the Federal Bureau of Investigation.

This is all getting serious enough that only there resources of Profilers, Investigators and Prosecutors, can truly stop this and if we are dealing with an National Organization that represents and organizes these Guardians, then we need a National Law Enforcement Agency to handle it..!!

If we are worried about terrorist these days (and that seems to be a Buzz Word), then we should be extremely worried about persons and or organizations that are Terrorizing our Elders and Disabled and there Families...!!

It's just so heartwrenching. No one should have to go through this.

I agree, Banksters. Why isn't this guardian under the microscope? And why is she still allowed more cases? If the court doesn't do something, then the court allows, aids and abets.

All in the best interest and well being of the ward?

Or in the best interest of those who unjustly profit?

Another example of the protection industry making decisions that are cruel and abusive to the ward and to their families who have no standing - how did this get so twisted?

Who profits....$...connect the dots to the power....and control through the court system.

Dying Grandmother deserves the comfort of loved ones at the end of her life.

Remember you, me, we are looking in the mirror.

the thing is lawyers will not go against other lawyers.."I have to work with them every day", you have to learn to right show cause and emergency motions in the right format and using the correct words. it takes a lot of time study the courts own websites. you need to study the rights of the Wards. I have written two emergency motions one conservator and one guardian and two of the same for show cause. you can file with the ombudsman but I don't think it's a fast procedure. There are free Lawyers but if the ward has a lawyer they will not do for the ward but you can get help writing motions and show causes. The guardian ad litems side with the guardian because again they too are Lawyers and it seems its all about keeping each other in a pay check. there are a few more articles on the VOD website about Mary Rowan. The judges only listen to the GALs.

The Police listen to Mary Rowan and have helped with kidnapping without court orders there are several PDF you can download of the court's website to help lawyers. the clerks think she is wonderful and I was told she is a past prosecuting lawyer.

Again family do not know how to fight back. Even Judges were Lawyers. There is the state bar website. Remember this guardian is a Lawyer and has been conservator too, Guardians have the right to decided where you leave and your medical care. there are forms to fill in to send to your congressmen because they are the only ones that can push laws threw to stop this abuse. never let it go to a court appointed lawyer its even worst.

all I can say is she will get hers and this stops here.devine intervention.

shes going to get hers,devine intervention.

I sent this site an email about her and why she is not on their most wanted list. she is my moms guardian appointed by the court, Terrence Keith.
It is a ponzi scheme for them.
She has over 400 wards that her and Kathryn (Katie) Macdonald oversee.
They are rude, take the wards rights and previous DNR's and change them to FULL CODE.
Even my own investment guy who handles my IRA knows how wicked she is.
The hospital where my mom is right now knows all about her and how she mis-handles cases.
I feel a big lawsuit coming her way soon.