Jan Van Holt, 58, and William Price, 57, both of Linwood, were arraigned in Atlantic County for their alleged involvement in a 10 year-long conspiracy to steal seniors’ life savings.

Van Holt and Price are part of a group of six who investigators say conspired to steal $3.8 million dollars from at least 16 victims.

Others indicted in the case include Van Holt’s sister, Sondra Steen, 59, of Linwood; and Susan Hamlett, 56, of Egg Harbor Township.

Dr. Maria Teresa Daclan, 53, of Galloway Township was indicted for allegedly lying to a detective to protect Van Holt.

The sixth person, Barbara Lieberman is already behind bars. She previously pled guilty and agreed to forfeit $3 million in restitution and testify against the others accused.

In March, Atlantic County Superior Court Judge Michael Donio called Lieberman the “quarterback” of the ring of alleged scam artists and sentenced her to ten years in prison.

Lieberman, of Northfield, was a court appointed guardian and leading specialist in elder law in Atlantic County.

Investigators say the group posed as trustworthy caregivers who took control of the finances of their victims by forging a power of attorney or obtaining one on false pretenses, adding their names to the victims’ bank accounts or transferring the victims’ funds into new accounts they controlled.

Ultimately, investigators believe the group stole $3.8 million and used the money to pay off six-digit credit card bills and buy things like Lieberman’s new BMW and a luxury condo in Florida.

Investigators say Van Holt and Lieberman used their positions of trust within the county to identify their victims.

“Most of these people didn’t have the capacity to keep an eye on their money and their assets so they were taken advantage of in that way. They looked for people who were elderly and had assets,” said Deputy Attorney General, Yvonne Maher who is handling the prosecution of the defendants on behalf of the state’s Division of Criminal Justice.

An investigation by New Jersey State Police and Division of Criminal Justice has revealed at least 16 victims. With the exception of one, all of the victims are dead.

If you suspect that you or a family member have been victimized you can call the New Jersey Division of Criminal Justice’s tip line toll free at 866-TIPS-4CJ. 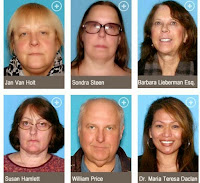 I-Team Exclusive: Seniors Says She was Forced Into Nursing Home
Posted by NASGA

This is a case of true conspiracy and I hope each one of them goes to jail for many years.

We all know there is a conspiracy in our cases, but to prove it is hard. I'm glad to see all of this documented so people can see we're not nuts.

This story should have made the national news. It's so ugly and people need to know that it could happen to them.

I smile anytime one of these crooks faces jail.

I hope sentencing guidelines are strong enough to ensure the defendants receive the maximum sentence in prison with no time off for good behavior, no mercy for those in positions of trust who use those positions for self serving purposes.

Thank you to the media for alerting your viewers about the predators who laying in wait for their prey.

Professional Guardian Rebecca fierle santonian needs to know first hand on how it feels to be a slave, she has stolen so much more then just money from people she has stolen precious time and memories . yes rebecca I know who you are and your assistant too and i'm not going to play your game, legally speaking i'm going to bring you down!!!!!!!!!!!!! '' legally speaking.