Clark County Court records indicate that April Parks' attorney, Lee A. Drizen, was representing a party in a lawsuit against the buyer at auction of Mrs. Indig's house, and should have informed Indig's guardian (Parks) and Indig's family that the house was being auctioned. 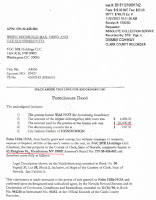 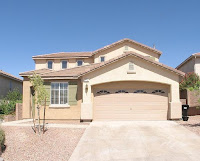 "Parks took control of the Ward's residence at 43 Pangloss Street, Henderson, Nevada 89002 on June 20, 2013, the primary residence of the Ward. The house was in the name of the INDIG FAMILY TRUST. Parks first made a threatening telephone call to Elizabeth (Indig), then came to Elizabeth's home taking her keys to the property and mailbox, and threatening her with trespassing and prison should she (try to re-enter) the property. April Parks was dressed resembling a law enforcement official complete with badge, baton, and wide belt with many keys. Parks also ordered guards at the gate to not let Indig's daughter pass. Parks has already submitted evidence for reimbursement of payment to change the residence locks, and provided an Occupancy Verification to Wells Fargo Bank dated September 24, 2013 signed by her confirming Parks was in control of the residence thus substantiating that Parks controlled the Ward's residence.

Elizabeth's daughter informed Parks verbally on June 20, 2013 that the home and its contents were part of the Indig Family Trust, and that Parks had no jurisdiction or rights to the home and its contents. Parks told the daughter that the court decided that she, April Parks, as an Officer of the Court, was in control of her mother, the home and its contents. Parks again reinforced that she was in charge, and if the daughter interfered with Parks, she would go to prison and never see her mother again. Parks sold the contents of the Indig home between August 10 and August 11, 2013 in violation of NRS 159.113 and 159.1515 which requires notification and permission of the court to sell personal property. Parks did not request permission to sell the Ward's belongings from the court, nor did she inform the court there was a home belonging to the estate.

Parks acted in violation of NRS 159.083 in her negligence to perform her duties to protect and preserve the estate of the Ward. Parks should have been collecting the Ward's mail, and was negligent in NOT PAYING (emphasis added) the HOA fees on the residence. Parks has argued that she had no jurisdiction over the Trust and no responsibility for the home, yet her actions reveal her fraud in taking control of the residence. The past due (HOA fees) were not addressed by Parks which then resulted in the home being foreclosed on by the HOA and sold at auction on November 21, 2013 for $22,000. All of this was unknown to Mrs. Indig's family until August of 2014 when Parks filed the First Annual Accounting almost a year late. Had the First Annual Accounting been filed on time, Mrs. Indig's daughter would have had time to pay the back HOA fees thereby saving the home from foreclosure."


The Boulder City, Nevada Police Department has launched a criminal investigation into the actions of April Parks in relation to the Indig case (Parks is a Boulder City resident). Judge Steel has been informed of the possible fraud, but has not yet taken court action against Parks, possibly pending the outcome of the Boulder City investigation.

I believe before it's all over April Parks will be sent to jail. She should be.

Not only should she be put in jail but all her assets should be sold to reimburse those she has stolen money from. If her assets don't cover these costs any future earnings should all be taken until the debt is paid. This woman is pure evil and so is this guardianship process across the US. UNBELIEVABLE.

Parks should be arrested for impersonating police.