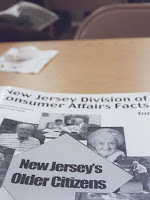 A man tasked with helping an elderly couple instead used their trust to drain their savings as part of a multi-million dollar fraud scheme.

William Price admitted he stole $125,000 from one elderly couple he met as a caseworker for Atlantic County Adult Protective Services, according to the office of acting Attorney General John J. Hoffman.

Price was indicted with five other people accused of defrauding more than a dozen clients of $3.8 million.

The 57-year-old Linwood man pleaded guilty Friday to second-degree theft by deception, according to a release from Hoffman’s office. Under Price’s plea agreement, the state will recommend a sentence of five years in prison, and Price will have to repay the $125,000 he stole. He’s scheduled to be sentenced Sept. 18.

Price worked with Jan Van Holt at Adult Protective Services where in 2006, he befriended the elderly couple and recruited them as clients for Van Holt, Sondra Steen, and Barbara Lieberman. The trio was accused with stealing more than $800,000 from the couple, the release said. Price received $125,000 of the stolen money.

“Price callously betrayed the trust and friendship of an elderly couple to enrich himself,” Hoffman said in the release. “As a social worker, he should have been all about helping them, but instead he set them up to have their savings stolen by him and his co-defendants.”  (Continue Reading)

I hope he gets a long prison sentence.