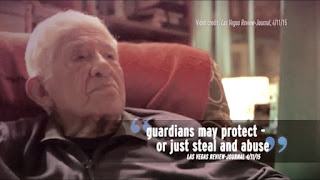 LAS VEGAS - On a cool winter day in 2013, I was invited to meet then-93 year old Guadalupe Olvera on the veranda of his million dollar hilltop home in Sun City Anthem overlooking the Las Vegas Strip.

Mr. Olvera was there to list the fully-paid-for 3,000 square foot house with a realtor. The house was his last remaining asset from an exploitative guardianship that would later become the basis of a $1.2 million dollar political advertising battle for the about-to-be vacated U.S. Senate seat of Harry Reid.

Olvera explained that he was going to sell the house before his court appointed private guardian Jared E. Shafer could transfer title to himself and sell the property, or as Mr. Olvera feared, move his own family in to enjoy the home Olvera and his late wife Carmela had planned to live in during their golden years.


Up until that day on the veranda, most of Olvera's liquid assets totaling over $420,000 had been drained by Shafer and his attorneys with the approval of Clark County Family Court Judge Charles Hoskin and his appointed Hearing Master Jon Norheim, that's until a California Superior Court Judge put a stop to the exploitation and terminated Shafer's years-long control of Olvera's person and assets.

My February 25, 2013 AmericanMafia.com story “GUADALUPE OLVERA'S WAR” told of Mr. Olvera’s battle to regain his civil rights. Three years earlier, Olvera had violated Shafer's orders and moved back to Santa Cruz, County, California to spend his remaining years with his family. In retaliation, Shafer had Judge Hoskin issue a Contempt of Court arrest warrant for Olvera's daughter. Meanwhile, Jared Shafer and his lawyers embarked on a mission to drain all of Olvera’s liquid assets, Shafer charging $250 per hour to read emails, and paying high priced Las Vegas attorneys to try to force the old soldier to return to Nevada where he had no family or friends.

The story of Olvera'’s plight began to inspire news coverage as Shafer bled the elderly gentleman's trust and attempted to gain title to his plush home on the hillside in Henderson. In the meantime, calls and letters went out to then-Nevada Attorney General Catherine Cortez Masto from Olvera’s only living relative Becky Schultz and others asking the AG to intervene and stop the exploitation. They were in response to Cortez Masto's website that said the AG would stop elder abuse and exploitation. Nonetheless, the AG refused to help Olvera and other wards of Shafer. This became the basis for last week’s Associated Press stories published in newspapers across the nation about a well documented political TV ad exposing Cortez Masto turning away guardianship victim's complaints. This during her highly contested race for national political office.

Lupe Olvera would be smiling!