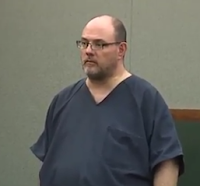 LAS VEGAS (KTNV) - The No. 2 defendant in the state's largest-ever case of elderly exploitation is now behind bars in Las Vegas.

According to prosecutors, Mark Simmons acted as private, professional guardian April Parks' right-hand man.
A former employee describes Simmons as the "Air Traffic Controller" in Parks's guardianship office that was allegedly run as a criminal syndicate. Parks is charged with more than 200 felony counts while Simmons faces more than 100 counts including racketeering and perjury.

The man who pulled in hundreds of thousands of dollars when he supposed to protect the elderly told a judge Wednesday he couldn't afford an attorney.
According to court documents, Parks and Simmons told people Simmons was qualified to evaluate the elderly to determine if they suffered from dementia or Alzheimer's. But investigators say he was not a qualified social worker or medical professional.
Despite that, they found several cases where the so-called mental evaluation by Simmons "was used as the sole evidence, or as supporting evidence, to the court for determination if an elderly person needed guardianship."
Court records also show evidence of Simmons hand-calculating how many hours of service to bill a client to "zero out her last remaining dollars."
Simmons will be arraigned next week after the Public Defender's Office considers whether to appoint him an attorney.
Full Article & Source:
CONTACT 13: Guardianship abuse defendant faces judge
Posted by NASGA

Remember folks this is an example of what is going happening nationwide. Innocent people being declared incapacitated or incompetent at the word of this unqualified piece of trash.

WARNING: I hope you and everyone in your family over the age of 18 years old, have your Durable Powers of Attorney for Health Care and Property with long list of successor agents handy. It's the only protection we have to have a chance to avoid court ordered hell.