Steve Miller: Jason Hanson's Case May Have Been Compromised

"She (the officer) said there was no evidence that (Jared) Shafer did anything underhanded and was just doing his job like he was supposed to." - Jason Hanson, victim of exploitation 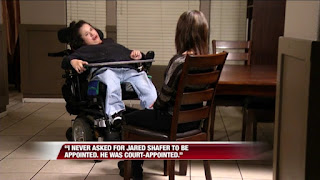 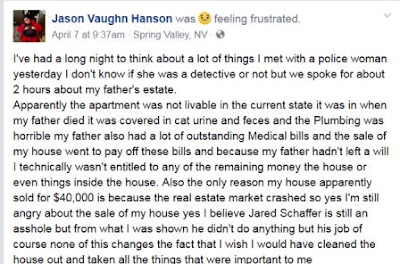 Hanson informed INSIDE VEGAS that the plain clothes officer did not show her badge or credentials during her visit to his workplace at Opportunity Village. She also reportedly gave Hanson her personal private phone number instead of her LVMPD office or cell number which raises the question whether she was visiting Jason on her own time, or Metro's?

Hanson told INSIDE VEGAS, "I did not bring up any names. She accused Steve Miller and Becky Olvera Schultz (daughter of guardianship fraud victim Guadalupe Olvera) of not having the complete story and only using parts to help with their own crusades against Shafer."

"The officer said Steve Miller didn't know how to read court documents or was intentionally misreading them to twist my story around."

"She didn't seem to think Shafer was an upstanding citizen but she seemed to think Miller and Olvera Schultz had some personal grudge against him. She said that Steve and Shafer had once been friends and they had a falling out and since then Steve has wanted to take Shafer down," stated Hanson.

Hanson continued, "I was at my father's home about 2 or 3 weeks prior to his death and the home didn't look bad. It didn't smell."

Jared Shafer and I attended the same high school in the early1960's, but never had a personal friendship. Mrs. Olvera Schultz is reserving comment until after she consults with her attorney. Her family is currently suing Jared Shafer et al in U.S. Federal Court under the Civil RICO Act for violating her father's civil rights and bilking over $430,000 from his estate. I have never met or talked to the police officer who visited Jason, though its obvious she has spoken with Shafer.

Sources at LVMPD have informed INSIDE VEGAS that the female officer who visited Hanson is the same officer who is investigating the Guadalupe Olvera guardianship fraud case against Shafer.

Court Minutes of June 13, 2006 show the names of parties who were court appointed to protect Hanson's person and assets during the nine years when hundreds of thousands of dollars were stolen from his inheritance.

Full Article and Source:
Jason Hanson's Case May Have Been Compromised
Posted by NASGA

The way for Jason Hanson to know if his father's home was a mess is to look at the pictures the guardian would have had to present to the court when the guardian got the court order to sell the home.