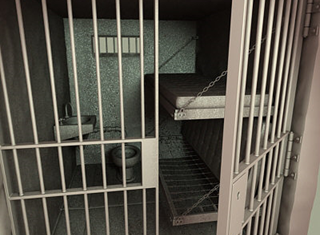 BOWLING GREEN — A former lawyer who stole more than $400,000 from a client took a gamble and lost, a judge said Wednesday.

Robert Searfoss III, 40, of Perrysburg was sentenced by Wood County Common Pleas Judge Alan Mayberry to 20 years in prison and ordered to pay $400,718 in restitution to the victim, Eric Walker.

Although Searfoss had no prior criminal history, the judge noted he had not repaid a penny of restitution.

“For someone that's held to a higher standard, that's engaged in the practice of law, and that's sworn an oath to uphold the laws of the state of Ohio, it's beyond the pale that someone would be in a position of trust as a trustee, entrusted with someone's life finances in their hands, and would instead use it to their own advantage,” Judge Mayberry said.

Prosecutors said Searfoss was in serious personal financial straits when he dipped into Mr. Walker's trust to buy a house and pay off debt, including back taxes, child support, and a home-equity loan.

A jury found him guilty Nov. 29 of two counts of aggravated theft, four counts of engaging in a pattern of corrupt activity, four counts of money laundering, three counts of theft, and one count of grand theft.

In addition to restitution, Judge Mayberry ordered Searfoss to forfeit his interest in a Shawnee Drive home in Perrysburg, a Georgetown Drive property in Bowling Green, a 2013 Dodge Dart, and the Bowling Green firm where he once worked, Searfoss Law, LLC.

Shackled and wearing orange jail garb, Searfoss apologized to Mr. Walker and his family, saying that he considered Mr. Walker a friend and knows that he violated his trust.

“I'm just ashamed of what I did,” Searfoss said. “I'm usually a very intelligent person, also very stupid. I got lost somewhere along the way. I had all these elaborate rationalizations in my mind. I mean, all the way through the trial, I just couldn't see things clearly.”

He said he didn't own up to what he'd done until the morning after the jury found him guilty.

Thomas Matuszak, chief assistant county prosecutor, asked for a 20-year sentence, saying repeatedly that Searfoss was figuratively playing poker — gambling with Mr. Walker's money and with his own future.

“The defendant now understands that the poker hand he played was a loser, and at the end of the day he went all-in and he took everything from Mr. Walker in the process,” Mr. Matuszak said. “As a result, he should be punished accordingly, not only to punish him but to deter others who might conceive of committing similar offenses.”

Mr. Matuszak read a letter from Mr. Walker to the court, in which the victim said the trust his grandmother had set up for him “should have been there for the rest of my life to pass on to my children after my death. I put my trust in someone that I would have never thought would do me wrong.”

Mr. Walker said that if Searfoss had begun paying the restitution, he would have asked for leniency, but that was not the case.

Defense attorney Rick Kerger pointed out that prior to trial, prosecutors offered Searfoss a plea agreement with a recommended sentence of three years. He asked for a sentence “as short as possible” for an otherwise law-abiding man.

Mr. Kerger said afterward that Searfoss was considering whether to appeal his 20-year sentence.

“It seems excessive for a first-time offender,” he said. “He's given up his law license. He's lost all his assets. The court is stressing the importance of making restitution and then sentences him to 20 years.”

What a way to start my day!