Six Seniors Move In Together To Avoid Nursing Homes 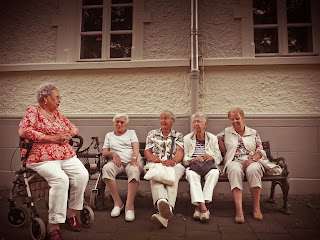 For most people, retirement is one of those topics that are hard to talk about. The ideas of growing old, being unemployed, and living alone aren’t just uncomfortable to think about, but they’re quite scary, too.

Six adults had a different idea about retirement.
A group of friends who call themselves as The Shedders decided to go with a co-living arrangement. It’s a strange setup that makes everyone who hears about it feel awkward.

Some of their family members even raised an eyebrow on them. They’ve been asked if they were a group of swingers or if they are doing strange things while living in a single home.

Contrary to what others think, these people planned their retirement arrangements early.
All of them weren’t interested in spending the rest of their lives in a nursing home. With that in mind, they figured that living close to each other and sharing everything that comes with growing old would be better.
To make sure that they’ll be able to carry out their plan, they did a trial and lived together in Sydney. Unfortunately, living in the area wasn’t for them. Sydney wasn’t just too fast-paced for them, but it was also costly.

That’s when they decided to pool all their savings and purchase a piece of land. It made the cost of retiring a lot cheaper. The area also made it easier for the 6 adults to establish a really strong community.
They were able to join the local choir and help raise money for different charitable causes. This includes palliative care and other causes that are close to their hearts.
The Shedders’ living arrangement is breaking stereotypes and misconceptions.
Living with other adults is way too different when you compare it with living with people who are in their 20s or 30s. At their age, the friends are able to properly divide housework. They share the bills, too.

Full Article and Source:
Six Seniors Move In Together To Avoid Nursing Homes
Posted by NASGA

Email ThisBlogThis!Share to TwitterShare to FacebookShare to Pinterest
Labels: Inspiration

I think it is a great idea. It give companionship and they could help each other. Better then a nursing home so long as they can get around on their own.