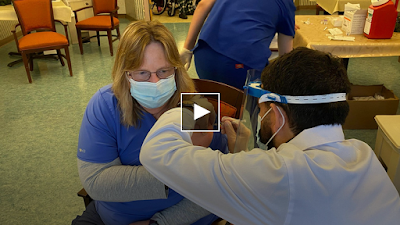 Landmark Care was the first nursing home in the county to administer the vaccines. Nearly all of the residents at Landmark Care have gotten their first doses.

"I'm just going to be happy when all of this is over, and then we can go on with our lives," says 88-year-old resident at Landmark, Freddie Green.

The Yakima Health District says making sure staff and residents at nursing homes and assisted living facilities is an extremely high priority. Lilian Bravo with the health district says she doesn't yet know exact numbers on how many doses have been delivered and administered and to which local long term care centers.

So far at least Prestige Care in Union Gap and Willow Springs in Yakima have begun administering vaccines to residents and staff.

Landmark says 57 of its 62 people who stay here, and 32 staff have gotten their first shot.

"We're actually starting to turn, and I can see an end. That's the most important thing," says Jane Davis, an administrator at Landmark.

Green got his first shot last Tuesday. He and his wife survived COVID-19 after being hospitalized in May with severe symptoms.

"We're recovered, and we're miracles because we were both very bad. They didn't expect us to live," says Green.

He was eager to get that vaccine in his arm.

"I'm just looking forward to when this is over, so that we can all get together, you know congregate," says Green.

Since the pandemic began, the hardest part, he says is having to be on lockdown. March was the last time he got to see his daughters inside.

"Oh it's terrible. The fifth of March was the last time that we got to you know hug them and be with them," says Green.

Davis says she's hoping they'll get to allow visitors back inside the building by the summer, when more of the community has gotten the vaccine.

"We want our families back in our building with our residents," says Davis.

The Yakima Health District today says it will still take some time before everyone in group 1-A receives the vaccine because of the size of our county and the amount of people who work in health care here.