A diary of Elder Financial Abuse and Fraud. Locked away in an Assisted Living Facility against her will. A crime perpetrated by her Professional Legal Guardian:

Marked For Destruction is a true crime story, a diary account of Adele Fraulen-a senior lady who had made her way in life with little help from anyone. Suddenly, a brother dies leaving the earned interest from a $1 million dollar estate for her and a surviving brother to share. But when Adele sought professional help to manage her inheritance she was seen by the professionals she trusted, a legal guardian and her attorney, as an easy "mark." Adele signed documents represented to her by the professionals as a revocable contract for them to help manage her new finances. The contract's small print would also allow them to become her legal guardian if she ever were to become incapacitated. Soon after signing, Adele decided she did not need outside help and asked the guardian and attorney to cancel her agreement with them, but instead of honoring her desire they began court proceedings to have her declared mentally and physically incapacitated--thereby invoking the "if" clause. Their clever schemes succeeded and Adele was eventually confined in a locked nursing home where her food was drugged to help keep her quiet and her contact with the outside world was limited.

They took her freedom, her life and her money, but a neighbor came to her rescue. Adele's story, described in the book Marked For Destruction, tells of her neighbor's exhaustive and successful fight to free her from captivity.
Source: Marked for Destruction by Officer John Caravella /retired 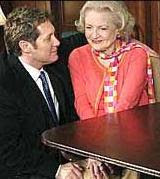 TELEVISION SERIES: The producers of "Boston Legal" portrayed this story's theme, highlighted by the performances of Betty White and Norma Michaels as Adele. Norma Michaels captured the desperate plight Adele lived and provided a portal to the significance of this crime in today's society. The life-altering events of this story unfold daily in our own backyards.

Does life imitate art or vice-versa?