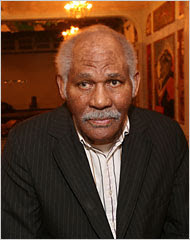 John L. Phillips Jr., a retired Civil Court judge known as the "Kung-Fu Judge", who owned theaters in Brooklyn that were a prominent platform for black activists in the 1980s, has died. He was 83.
In 2001, Mr. Phillips, at 77, announced he would challenge the incumbent, Charles J. Hynes, in the race for district attorney in Brooklyn. But he was declared mentally incompetent after an investigation by Mr. Hynes that some said was politically motivated. Mr. Hynes said the action was undertaken for Mr. Phillips’s own good. A series of court-appointed guardians took over Mr. Phillips’s affairs, but a court case ensued involving allegations that the guardians had mismanaged his person and finances.
Source: Civil Court Judge Is Dead

It was reported that this self-made multi-millionaire who served honorably for 13 years, was destitute and confined against his will to a Bronx nursing home. He was barred from receiving visitors or mail or even phone calls without permission of the court. His property had been sold off in unpublished and possibly illegal auctions. Millions in assets disappeared.
Source: At long last, please set Judge Phillips free

After spending just over two years living in a cramped, foul-smelling room in a bleak nursing home at the outer reaches of the Bronx, the retired Brooklyn judge was finally transferred to an assisted living facility closer to his Brooklyn home.
Source: Court Orders Release of Retired Judge from Nursing Home

The Brooklyn Eagle reported the saga of the retired judge’s guardianship case, along with a potential million-dollar fraud. The Eagle revealed details of an accounting of the tenure of a former property guardian, a report that shows hundreds of thousands of dollars in misappropriated funds. Accounting, filed in Brooklyn’s guardianship court, details irregular financial disbursements by former property guardian Emani Taylor, made from the bank accounts of retired Judge John Phillips, a ward of the guardianship court. Phillips’ supporters hope this accounting could be the catalyst for a criminal probe into what they claim have been years of mismanagement and outright theft.
Source: Were Funds Pilfered from a Retired Judge’s Estate?

It was also reported that the retired judge owed a million dollars in back taxes. Since 2001, the responsibility for his taxes has been with a string of law guardians appointed by the state court since 2001. But for reasons that are not yet clear, the lawyers involved in the case never filed tax returns.
Source: The Tax Travails Of the 'Kung-Fu Judge'

Court-appointed guardians for Alzheimer's-stricken ex-Judge John Phillips failed to file any income taxes for their elderly ward for more than five years - running up a million-dollar bill to the IRS, according to court papers. In a flurry of strongly worded motions, a current guardian slammed two predecessors, Ray Jones and Frank Livoti, for filing no taxes on Phillips' multimillion-dollar estate, which includes some dozen buildings in Brooklyn.
Source: Judge Money Melee - Guardians Lax on Tax

A Brooklyn lawyer had been suspended from practicing as a state panel investigated her handling of the estate of John L. Phillips Jr. The lawyer, Emani P. Taylor, had been accused of improperly enriching herself from the Phillips estate. A panel in the Supreme Court’s Appellate Division called for Ms. Taylor’s immediate suspension pending further investigation, saying she had refused to cooperate with a court investigation into allegations of professional misconduct as Mr. Phillips’s guardian. The panel also found that Ms. Taylor “intentionally converted guardianship funds.”
Source: Lawyer Is Suspended as Conduct Is Criticized

The People vs. the People

A Brooklyn-based filmmaker spent the better part of the last two years compiling a documentary on the retired civil court judge’s legal efforts to restore his once-vast real estate empire, as well as the 2001 election for district attorney. The film tells the story of how a real estate empire worth an estimated $10 million was dissipated, under the administration of a series of attorneys appointed by a state guardianship court.
Source: Film Tells of Retired Judge’s Guardianship Case

See also:
Exactly how corrupt and vindictive is the Brooklyn District Attorney’s office?

What an Outrage! From judge to ward of the court