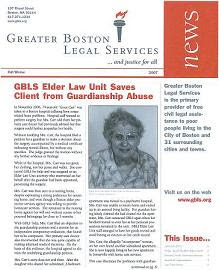 In November 2006, 74-year-old “Grace Carr” was taken to a Boston hospital suffering from stress related heart problems. Hospital staff wanted to perform surgery, but Mrs. Carr told them her primary care doctor had previously advised her that surgery could further jeopardize her health.

Without notifying Mrs. Carr, the hospital filed a petition for a guardian to make a decision about the surgery, accompanied by a medical certificate indicating mental illness, but without any specifics. The judge granted the motion without any further evidence or findings.

While in the hospital, Mrs. Carr was not given her clothing, nor her purse and wallet. She contacted GBLS for help and was assigned to an Elder Law Unit attorney who intervened on her behalf after the guardian had been appointed, preventing the surgery.

Mrs. Carr was then sent to a nursing home, despite expressing a strong preference for returning home, and even though a Boston elder protective services agency was willing to provide home care services. She remained in the nursing home against her will and without access to her personal belongings for close to 3 months.
With GBLS’ help, Mrs. Carr filed an objection to the guardianship petition and a motion for an independent competency evaluation, that found her to be competent. Her primary care doctor also documented that she was quite capable of making informed medical decisions. On the basis of this evidence, the hospital agreed to dismiss the underlying guardianship petition.

This story does not end there.

The article also states : GBLS and our partners will continue to fight for guardianship reform on behalf of the many seniors like Mrs. Carr who are the victims of the current procedures.