No Right To Seize 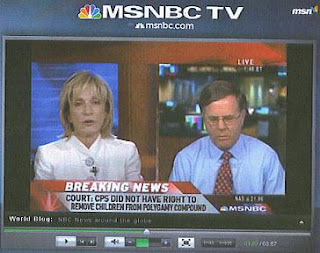 A state appeals court has said authorities had no right to seize more than 440 children in a raid on the FLDS ranch last month.

The state took 464 children into custody in April, but the ruling directly applied to the children of 48 sect mothers represented by the Texas Rio Grande Legal Aid, said Cynthia Martinez of the agency. About 200 parents are involved in the polygamy case.

The Third Court of Appeals in Austin ruled that the state offered "legally and factually insufficient" grounds for the "extreme" measure of removing all children from the ranch, from babies to teenagers.

The state never provided evidence that the children were in any immediate danger, the only grounds in Texas law for taking children from their parents without court approval, the appeals court said.

"The state never provided any evidence that the children were in any immediate danger..."

Does the state (or county) provide evidence that the AIP is in immediate danger when slapping a temporary guardianship/conservatorship on them?