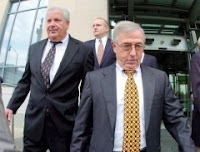 One compelling question in the wake of the Luzerne County judicial scandal is this: Can Pennsylvania's legal version of Humpty Dumpty be put back together again? That's something the Interbranch Commission on Juvenile Justice is looking to answer, and they only have until May 31 to come up with their suggestions.

The commission certainly has its work cut out for it. Because while there are plenty of questions, I'm not sure if the state's legal community has the stomach for all the answers.

How do you restore faith in a court system where two former president judges have been accused of racketeering? Or when the state's judicial conduct system was put on notice years in advance and admittedly did nothing? How do you protect the rights of juveniles when the pressure from schools, police, government, and even some parents is for judges to "get tough"?

The commission's name alone lets you know that its primary purpose was to address the most notorious aspect of the allegations against former Luzerne County Judges Michael T. Conahan and Mark A. Ciavarella Jr. — that they took $2.8 million in payments from the builder and former co-owner of a private juvenile detention center and sentenced juveniles there, even when unwarranted. The judges reject the allegations.

But the commission's hearings over the past several months have revealed deeper problems in Pennsylvania's court system, not just in Luzerne County. The testimony and the line of questioning by the commission have covered larger ground than I'm guessing any of its members anticipated.

We reported back in July 2009 that multiple sources described how Conahan and Ciavarella had essentially run the county for years, ruling by fear and intimidation. The commission has heard plenty of testimony that corroborates that. In fact, when pressed as to how "this could happen" — namely the kids' rights being trampled on without anyone challenging it — the constant refrain has been either fear of the judges or blind faith in their authority.

How do you check that? How does the commission address that?

The entire country's judicial system appears to have serious ethical problems. There have been complaints and allegations for years about similiar problems with the vulnerable senior citizens, that go unchecked. Seniors are put under guardianship, often unwarranted, while their estates are ravaged, under court protection. HA HA!

It can certainly be fixed if a thorough job is done cleaning out the corrpution and the stench of it.

this is so out of control PA is not the only area with problems those who had the responsibility of investigating the complaints who did nothing need to be removed and prosecuted that is the only way to send a message - STOP IT!

Warning to the good people of the USA, look closely at these ordinary people who wear costumes of judicial robes, yes costumes. The courtroom is nothing more than a theater, a stage for performances with scripts.

These 2 judges belong in a cage for life - period.

Everything they own needs to be sold to satisfy civil judgments.

No immunity - no mercy - harhest punishment - life in prison with no parole. Better yet, no visitors, nothing from the outside world - isolate, medicate, take their estates!