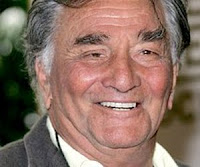 Legendary "Columbo" star Peter Falk has died at the age of 83.

Falk "died peacefully at his Beverly Hills home in the evening of June 23, 2011," a rep tells KTLA.

The actor had been suffering from dementia and Alzheimer's disease, according to his adopted daughter, Catherine Falk.

In 2009, a judge established a conservatorship for the ailing actor after a court battle between Catherine and Falk's wife of 34 years, actress Shera Danese Falk. His wife was appointed conservator.

I hope there was some money left for the family after the lawyers bills.

I am sorry for his passing and sorrier still for the pain and suffering of his final years.

I loved Columbo. Falk gave that character a classic standing. Good for him he used his physical disability as a positive motivation to pursue his dearms. Sad that the last years of his life was not what he had wanted or planned for dragged through the courts, shameful and a disgrace. Now I pray he can rest in peace.