Britney Spears Breach of Contract Countersuit May Go on Hold 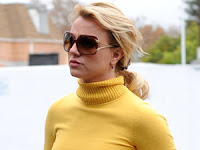 Lawyers for a company that provides licensing opportunities for Britney Spears -- and which sued the singer and her father for alleged breach of contract -- want a judge to put the singer's countersuit against the firm on hold.

In court papers filed Friday, attorneys for Brand Sense Partners claim they cannot defend against the countersuit because they have been blocked by a probate court from taking the 29-year-old pop star's deposition on grounds she is incompetent to testify.

The Brand Sense lawyers also state in their court papers that they intend to challenge a sealed order by Judge Reva Goetz preventing Spears' testimony.

The judge is supervising a conservatorship order she placed over Spears in early 2008 when the singer began exhibiting bizarre behavior.

Since then, Spears has gone on concert tours, given media interviews and made numerous public appearances, according to the company's court papers.

"Brand Sense also intends to take measures to have all court records in the conservatorship proceedings unsealed," according to the company's court papers.

"Brand Sense has the right to know why Ms. Spears continues to be coddled in a conservatorship that has clearly outlived any legitimate purpose."

The company intends to get "immediate relief" from the probate court order, its papers state.

"The notion that Britney Spears is mentally or emotionally unfit to testify under oath is a sham," according to the Brand Sense court papers.

A hearing is scheduled Monday before Judge Teresa Sanchez-Gordon, who is presiding over the Brand Sense complaint and Spears' countersuit.

What a great case! This should be fun!

I am thinking the same thing, Thelma!

Wouldn't it be something if Britney figured out she's been shammed?