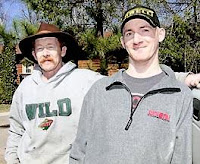 Last year, as a 35-year-old vulnerable adult, Jim [Stene]lived in the Clark Lake Home in Brainerd and voted in the 2010 election via absentee ballot on Oct. 29 in the Crow Wing County historic courthouse along with other group home residents.

Monty Jensen, Crow Wing Township resident, who was also in the courthouse at that time, said he was concerned by what he saw as voter fraud.

In his affidavit, Jensen said he witnessed what appeared to be staff members from a group home filling out a client’s ballot and verbally instructing a client who to vote for during absentee balloting.

In March, Ryan said what Jensen observed was somewhat substantiated but he didn’t have evidence of a crime beyond a reasonable doubt. It is legal for people in guardianship status to vote in Minnesota and be assisted if needed.

Lynn Peterson, owner of Clark Lake Home, did not return a call seeking comment for this story.

On April 26, Al Stene testified before the House of Representative’s Civil Law Committee along with Rep. Mary Kiffmeyer, R-Big Lake, who authored a bill this spring regarding changes to voter eligibility requirements, including those directed at people placed in guardianships.

The allegations of voter fraud were taken by some as a partisan issue. Stene has maintained that is not his focus.

Full Article and Source:
Vulnerable Adults as Voters at Issue
Posted by NASGA

When all other rights are taken away by guardianship - the right to contract, drive, marry - because of a person's cognitive or other problems, why should they have the right to vote and then be manipulated?

I agree, Anonymous. I know the right to vote is precious to all of us, but I believe it's down on the list of rights taken away by guardianship and conservatorship proceedings which lead to abuse.