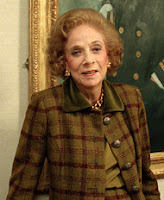 Brooke Astor’s only son saw his inheritance slashed in half and had his control of the estate’s powerful charitable contributions stripped away as part of a settlement that ended a bitter, five-year dispute over the family’s millions.

The settlement, ratified on Wednesday in Westchester County Surrogate’s Court, also lays out how Mrs. Astor’s roughly $100 million fortune will be distributed: $30 million will go toward the creation of a Brooke Astor Fund for New York City Education, and millions more will go to Prospect Park, Central Park, city playgrounds and various cultural institutions.

The settlement, which exposed bitter splits in one of New York society’s historically glamorous families, was most noteworthy for what it took away from Mrs. Astor’s son, Anthony D. Marshall.

Mr. Marshall, 87, who was convicted three years ago of stealing from her in the later years of her life, had his inheritance cut to $14.5 million from about $31 million. In addition, he and his wife, Charlene, will not be able to choose which charities receive bequests from Mrs. Astor’s estate or how those bequests are to be used.

The settlement, negotiated by the office of Attorney General Eric T. Schneiderman, is binding, regardless of what happens with Mr. Marshall’s criminal appeal.

It's a good ending, and I hope her grandson got a fair share, too.
The state should have rewarded him for turning in his father!

No matter what, I think the simple solution would have been to do exactly what Brooke Astor requested in her will.

Oh, and don't worry the lawyers all got more than their 'fair' share! Surrogate Judge Anthony Scarpino of Westchester Co. couldn't wait to get his paws on the prize. However, the Manhattan Courts made an attempt to grab the pot of gold. Like flies with honey!