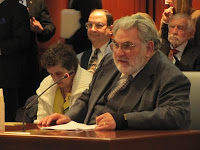 One of Hartford Probate Judge Robert K. Killian Jr.'s frequent "customers" is an elderly woman whose mental illness gives her delusions that there are dangerous people living in her cellar. When she's not taking her medication, she calls police, who come and reassure her. Every few times, they take her to be examined, and she ends up getting committed to a hospital.

It's a cycle that the judge says he sees too often: people with severe mental illnesses not taking their medications when they're at home, leading to behavior that lands them in the hospital involuntarily, or in jail. While there, they don't receive disability benefits and fall behind on their rent, eventually getting evicted and becoming homeless, losing one of the keys to stability in the community.

"I'm seeing some of these people three or four times a year for commitments," Killian said. "We spend an awful lot of time trying to find housing for discharged patients from mental hospitals ... And I hate a system that forces them to lose it."

Killian wants Connecticut to follow the lead of the majority of other states by allowing for people with psychiatric disabilities to be medicated, even if they object, while they're in the community, if remaining unmedicated would leave them or others at risk of harm. He believes the proposal, which would allow for up to 120 days of forcible medication, would offer a chance for people to become stabilized and potentially choose to take the medications, making them more likely to avoid the cycle that brings them back to the hospital.

The concept, part of a bill pending before the legislature's Judiciary Committee, is vehemently opposed by advocates for people with mental illness, who say it could undermine efforts to engage people in treatment and would go against the state's efforts over the past decade to create a behavioral health system that emphasizes clients' choices and participation in their own treatment.

Even Killian acknowledged that it's "a reach by Connecticut standards."

How about we force the bad judges, instead, to get off the bench?