The Daniel Gross Case Decision: Standing Up for the Elderly and Infirm 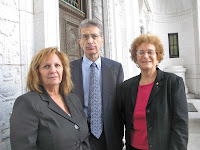 Old age is sometimes described as a “second childhood,” but lawyers for the elderly got a loud and clear warning their clients are not children in the eyes of the law.

That’s the message the Connecticut Supreme Court sent in Daniel Gross v. M. Jodi Rell, a decision emphasizing that attorneys in probate proceedings must heed the wishes of their elderly or infirm clients and not substitute their own judgment about what’s in the client’s best interests.

Lawyers for the elderly who act on their own, the Supreme Court warned, do not enjoy absolute immunity and can be held personally liable for their actions.

In this case, the Supreme Court recognized that placing a person in a conservatorship — as a ward of the Probate Court — “is one of the most serious infringements on personal liberty and autonomy authorized by law.” In this situation, the individual’s life is mightily affected by people in two roles.

One is the probate court-appointed attorney, who represents the person at competency and other types of hearings. The second is a court-appointed conservator — often, but not necessarily, a lawyer — who under court supervision oversees the elderly or infirm person’s economic and physical well-being. In this case, the justices stated clearly, for the first time, how much legal insulation from civil lawsuit liability people in the two roles deserve.

“People have a lot clearer lines than they had a month ago. It’s pretty clear that nobody can say, any more, that a court-appointed lawyer in a conservancy proceeding is the same as a guardian ad litem in family court,” said attorney Sally R. Zanger, who argued for the plaintiffs.

A guardian ad litem’s role is to advocate for the best interests of the child in divorce and custody proceedings, and not necessarily heed the child’s stated preference. But in Gross, said Zanger, the justices “say very clearly, ‘adults are not children.’”

She continued: “It’s a very thoughtful decision, [and] they’re trying to make it really clear that there’s no situation where the lawyer can throw the client under the bus in a conservatorship proceeding. They have to represent what the client is asking for. Deciding the ‘best interests’ is not their problem,” it’s the judge’s problem.

The Supreme Court decided that conservators are immune from civil liability only when their conduct is authorized or approved by the Probate Court. The high court also held that appointed attorneys lack any special immunity. And, in such proceedings, nursing homes have no immunity at all.

The court was filling in unwritten gaps in Connecticut case law at the request of the U.S. Court of Appeals for the Second Circuit. The underlying case dates to 2005, when Long Island resident Daniel Gross was visiting his daughter, Carolyn Dee King, in Waterbury.

Gross, a retired furnace technician, thought he was just briefly passing through Connecticut. He didn’t know he was about to become the poster boy for the legal rights of Connecticut’s elderly. When a leg infection landed him in a Waterbury hospital, a nurse asked for Probate Court help in having Gross moved to a nursing home. Probate Judge Thomas Brunnock appointed Waterbury lawyer Jonathan Newman to visit Gross in late August 2005. 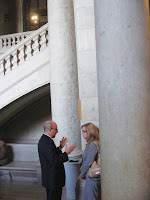 Attorney Newman reported that Gross seemed alert and intelligent, and opposed having a conservator. But Newman said he saw no reason to oppose the hospital’s recommendation that Gross become a ward of probate. On Sept. 1, 2005, Brunnock appointed Naugatuck lawyer Kathleen Donovan to be the conservator of Gross’ person and affairs. A week or two later, according to court pleadings, Donovan placed Gross in the locked ward of Grove Manor Nursing Home in Waterbury, where his roommate was a once-infamous robber who allegedly assaulted him.

At one point, Gross was authorized to take a one-day visit to his hometown in New York. During the trip, Gross was hospitalized briefly, and attorney Donovan went to Long Island with an ambulance and returned him to Grove Manor against his and his doctor’s wishes, the court records state.

Gross requested a habeus hearing, which was held before Waterbury Superior Court Judge Trial Referee Joseph T. Gormley Jr. Gormley would later write that the case “completely blows my mind” because Gross was so poorly represented. He set Gross free, ruling that because Gross was a non-resident, the Connecticut probate system had no jurisdiction.

U.S. District Judge Vanessa Bryant dismissed most of the claims after making unusually broad findings of quasi-judicial immunity – a doctrine that protects from civil liability people like prosecutors and others who are integral to the judicial process. Bryant then found the remaining claims didn’t add up to the $75,000 federal court jurisdictional minimum and dismissed the case.

The matter was appealed to the Second Circuit, which found Connecticut’s laws lack sufficient guidance on the issue of quasi-judicial immunity for conservators, court-appointed lawyers for the elderly and the nursing home defendant. It asked the state’s top court to explain.

Gross’s daughter, King, continued the case after her father’s death in 2007. She was represented by Zanger and Thomas Behrendt, of the Connecticut Legal Rights Project in Middletown. Behrendt called the recent Supreme Court ruling “a great decision. It really hammers on the fact that lawyers are accountable, [and] sends a really clear message about the dignity and respect to which our elder clients are entitled.”

Full Article and Source:
Standing Up for the Elderly and Infirm
Posted by NASGA

I believe this decision will be used by so many people to hold bad guardians/conservators/lawyers accountable in guardianship abuse cases.

A decision heard from coast to coast with many in the middle in the heart of our nation. I hope this just decision puts the miscreants on notice. 49 states need to stand behind CT. Many thanks to all who stood by Dee during the hardest most painful time in her life. Rick Green is to be recognized for his efforts. Only God knows if Daniel Gross would ever have been heard without the press / media stepping up to educate the good citizens while giving Daniel Gross his disgnity, giving him a voice - we hear you!

What a legacy for Daniel Gross and Dee King!

Thank you Dee King for not giving up when so many others would have. I just bet you get your strength and determination from your Father.

I have to wonder how many appointed attorneys and guardians in CT, NY and VT are taking notice ??

I bet I could name a couple in particular...

Question is, will they change their ways or are they going down without immunity too ??

Great article and I hope there will be many, many more!

Let this decision ring across the land and be heard by abusive guardians who far too long have had it their way at the expense of our loved ones' freedom and sometimes even their lives.

It's just about time! Hooray!!! This decision will save many lives!

Dan Gross went through hell and this decision will save vulnerable people from hell.

I agree, Terry in Chicago, that Rick Green was instrumental in bringing Dan Gross' plight to the public and it grew legs from there.

The power of the pen and public opinion!

What a victory! Congratulations!

The tide is turning in favor of victims. This is wonderful.

people ,listen up.
There is no immunity at the federal level for these ad litems destroying homes and families and as for "under court direction" ? let the chips fall where they may.
There is no immunity for CPS workers,the police assisting them in illegal actions on and on.
Again,let the chips fall whjere they MUST as too many have been through their imposed hell.
The national DISGRACE REMAINS the bs to get not only your case filed on time,the FEES but try and find an atty to get IT DONE or at the minimum filed correctly and on time.
WHY ARE THESE COURTS basically inaccessible for civil rights violations but easily accesible for small claims on and on ?
SHOULDN'T THE DEFENSE of 1s Constitutional rights and righting wrongs BE the PRIORITY ?

and you better believe that THIS RULING will go far and wide to ALL that went through these kangaroo courts for basic guardianships of their own kids only to get slammed by these AAL USING THE HANDICAPPED KIDS to collect more fees,prolonging the cases to get more fees,TAKING OVER the handicapped SSI due to BEING GAL on and on,abuse the applicants exactly like the garbage within our juvvie and CPS hearings.
Man I hope these out of control AD LITEMS even get jail time,law licenses REVOKED and all BASED ON THIS RULING.
THANK YOU CT !
and YES I AM FILING ASAP.
I simply need to find the case number etc to cite.

Does anyone know WHY the "nurse" that dropped a dime that Mr.Gross was in need of probate proceedings WAS NOT HAULED IN ?
I'm sure I'm not the only one wonderimg HOW MUCH "commission"she received from whatever atty she called.
I find this strange.