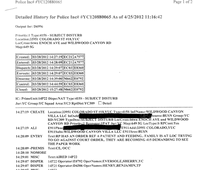 Wildwood Canyon Villa in Yucaipa, CA filed a false police report on March 28, 2012, in an attempt to isolate Jean Swope from her family. Lynnette Alvarado, Executive Director of the residential care facility, has a history of violating residents’ rights.

Swope was thrilled to see her loved ones again. No longer plagued by depression, Swope became quick to smile and “tell stories” to visiting love ones. She devoured special meals and goodies they brought for her. Her Alzheimer’s symptoms improved steadily with TLC from family.

Then on March 28, 2012, Alvarado ordered family to leave and not return. She refused to give any reason for her orders.

THE MALE SUBJECTS STARTED TO FEEDING HER A HAMBERGER. THE CAREGIVER TOLD HER TO STOP PER DOCTORS ORDERS AND THE DAUGHTER AND FRIENDS BECAME ARGUMENTATIVE WITH THE CAREGIVER STATING THEY WERE GOING TO FEED HER NO MATTER WHAT ….

There was no doctor’s order for dietary restrictions. At 115 pounds, Swope needs all the calories she can be enticed to consume.

Swope requested a Farmer’s Burger when family visited the night before. However, the lunch bag was never opened on March 28. Swope never had a chance to taste her favorite sandwich.

Alvarado ordered Swope’s visitors to leave and not return. The police report concluded:

BECAUSE OF THIS THEY ARE NO LONGER WELCOME ON THE FACILITY.

I am so happy to see a reporter writing about isolation!

This is happening all over the State of Florida by Guardians appointed by Judges. It is big business for them!

This is a bad thing these guardians are doing; the nursing homes are not acting alone.

read the US Supreme Court case of Sodal v. Cook County --- the police cannot povide private security, protection and enforcement for what are the persoanl wishes and actions of a private citizen when those wishes and actions are unlawful .... as in crimminally confining someone and violating their right to freely associate with whom they choose.

Also, a nursing home has no "expectation to/of privacy" in expelling someone from their facility. They have a visitation policy and they cannot, w/o a specific court order, prohibit anyone from visiting during those hours of the visitation policy

Isolation as retaliation is the4 very sickest part of this whole made scheme!

Thank you, Linda Kincaid, for breaking the ice on this subject and NASGA for publishing this article as well. Isolation is so very cruel to the family, but cruelst of all to the ward.

Linda Kincaid is a winner! Thank you for sharing, thank you for giving those who have been silenced a voice.

Thank you for your comment on the supreme court ruling. Our family is going through isolation now with our parent. This bit of information will help a great deal.