Across the country, disabled veterans’ families are in bitter battles with the U.S. Department of Veterans Affairs, trying to oust VA-appointed fiduciaries from their lives.

Two attorneys, Doug Rosinski of Columbia, S.C., and Katrina Eagle of San Diego, have taken on VA in cases involving allegations of bureaucratic mistreatment. Both said regional program managers sometimes overlook the misdeeds of paid fiduciaries while coming down hard on veterans’ relatives who do the work for nothing. 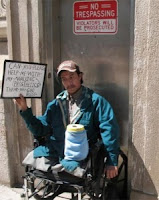 The agency’s policy is that family members get priority in fiduciary appointments, but it does not always work that way. And while many family members serve successfully as fiduciaries for disabled veterans, some get into trouble, often because of a lack of training or knowledge of the rules, R.Dean Slicer, a top regional program manager in Indiana, boasted in a November 2010 email to an Indianapolis bank official that they would have “fun” battling with a war veteran’s daughter. Carolyn Stump, a registered nurse, was trying to free her seriously ailing 81-year-old dad, William Evans, from a fiduciary at the bank who had tangled with the family and had recently been slow paying some bills, according to court records.

Slicer, who last year was promoted to oversee the fiduciary program in 13 states, declined to comment.

“It is very unfortunate that the VA gives any one person that much power,” said Stump, who is also her father’s medical caretaker and state court-appointed guardian.

Very sad. We support our Vets when they're fighting for us, but does our country in turn fight for them if they are disabled?

So our federal govenment has no more concern for our vets than the state court judges have for their aging/disabled citizens?