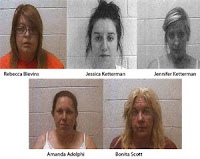 Rebecca Blevins, 39; Jessica Ketterman, 22; and Jennifer Ketterman, 20, all of Elizabethton, pleaded guilty earlier this year to two counts of willful abuse, neglect or exploitation of a dependent adult. Blevins was not eligible for diversion due to previous bad check convictions. At that same hearing, Amanda Adolphi, 33, Gray, pleaded guilty to failure to report the abuse.

In the plea agreements, the women were each given an 11 month, 29 day sentence, which will be served on probation. Adolphi was the only one granted diversion. After her year of probation, the conviction can be erased from her record.

A fifth woman, Bonita Scott, 51, Chuckey, was also charged in the incident, but she pleaded guilty to her case shortly after being charged.

“This case tears me up,” said Senior Judge Jon Kerry Blackwood. “We have over here four, probably very nice people, who have been contributing members of society. It’s inscrutable.”

After reading the entire article and learning that the caretakers where also videotaping the patients private parts to show friends along with other ongoing abuses, I am surprised that the judge considered the culprits to be "contributing members of society." The judge is right when he infers that the punishment should fit the crime but his "slap on the wrist" probation sentence has invited abuses in the future by these kids..... I see obvious "agism" in the judge's attitude.

They need granny cams in every room.

This is the very type of case where the judge should be making examples of the perps!

I agree with you 1,000%, Joe. What they did was sick and cruel and this lesson probably taught them nothing since there was no real punishment.


The Judge in the case is the problem!
SHame on him this is whats wrong with our Country!!

There is clearly NOTHING justice about the justice system -

ONLY for the ones WHO, Lie, Cheat, Steal, Abuse, neglect, exploitation get a Green card to continue - Pull your head out of your A..... Judge and lawyers and do the Right thing .. OR did you forget you Oath to obey the Law???
Elderly Abuse Judge have you heard of it???

Judge Blackwood stated "We have here... four, probably very nice people", how could he state that remark based on their actions - NICE
people wouldn't have done that to anyone and especially to the elderly.
You would hope the nursing home terminated their employment for
unprofessional conduct.