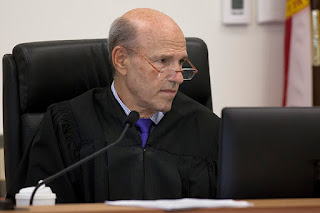 His wife’s [Elizabeth Savitt] job as a professional guardian leaves Judge Colin compromised, handcuffing him from fully doing his job, The Post found. He’s recused himself from 115 cases that involve his wife’s lawyers in the last six months of 2015 after The Post started asking questions in its investigation.

“When you have a judge suddenly recuse himself of so many cases, it certainly sends up a red flag,” Jarvis said. “How did a judge allow himself to be put in such a position? I have never heard of a judge doing such a thing.”

But Judge Colin doesn’t see a problem. Even before his recent mass recusals, he remarked in a court hearing that in the past he had required his wife’s attorneys to tell opposing lawyers that they represented Savitt.

But at least one attorney told The Post that’s not always how it worked. Gary Susser gave an example in which Colin’s disclosure policy fell short, saying he was “floored and shocked” when he found out about the conflict.

Attorney Sheri Hazeltine didn’t tell Susser until April that she works for Savitt, almost a year into a probate case, Susser said.

“She never disclosed her relationship until she was told by Judge Colin to do so,” he said. “It’s a huge concern for me when opposing counsel represents the judge’s wife.”

A transcript of the hearing shows Colin asking Hazeltine to disclose, she does so and then Susser objected to Colin continuing to preside over the case.

“It was news to me what I just found out,” Susser tells Colin.

Colin responds, “OK. That’s why we make what we call a disclosure.”

Colin then defends the policy that he would change later in the summer: “Can’t disclose until it’s, you know, ripe to disclose,” he tells Susser.

Colin had the case reassigned to another judge.

The judge spoke to The Post for hours, but because of his position, was limited in what he could say. He would only say on the record that he has dealt with the conflict with his wife properly through established methods.

If Florida is serious about fixing guardianship abuse, the state would start with judge Colin.

He's an embarrassment to good judges.