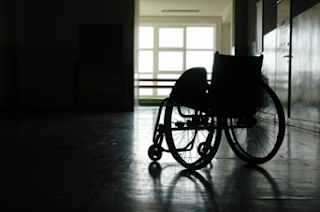 For decades, the federal government has attempted to address concerns over the quality of nursing home care in the U.S. It was only recently, though, that federal law included reporting requirements with sanctions for crimes against the elderly.

Since 2010, federal law has required nursing home providers to report the reasonable suspicion of a crime against residents to police and state oversight agencies, which in Pennsylvania includes the departments of Health, Aging and Adult Protective Services.

Reports to the state Health Department are confidential to encourage self-reporting. But a Reading Eagle review of state inspections over the past three years found many suspected abuse cases go unreported.

With 10,000 Americans turning 65 each day and studies showing as many as 1 in 10 seniors nationally have been a victim, elder abuse is a problem that is only expected to grow.

The pressing question then, is: Can anything be done about it?

But it all starts with nursing homes complying with federal law.

"If facilities aren't reporting these events immediately, it ties the hands of the police," said Sam Brooks, an attorney with Community Legal Services in Philadelphia.

'Something terrible is going on'


The penalties for not reporting are already stiff, with fines up to $300,000 and exclusion from federal participation in health care programs.

However, neither the Centers for Medicare and Medicaid Services, CMS, nor the state Health Department have penalized nursing homes for failing to report abuse.

In August, the U.S. Department of Health and Human Services' Office of the Inspector General determined that CMS "has inadequate procedures to ensure that incidents of potential abuse or neglect of Medicare beneficiaries residing in (Skilled Nursing Facilities) are identified and reported."

Advocates for the elderly found the report troubling and called into question the Health Department's oversight role.

"The magnitude of this report is just stunning," Brooks said. "CMS has done nothing to enforce it. This is scandalous."

Five cases were flagged in Pennsylvania and referred to the state attorney general's office. Joe Grace, spokesman for Attorney General Josh Shapiro, did not respond to multiple calls and emails seeking comment about the referred cases.

"They haven't taken any enforcement actions because the DHHS secretary didn't delegate the authority yet," said Dave Lamir, a regional inspector general who worked the team of auditors that produced the report. "They didn't identify anything because they don't conduct a data match like we did."

The report determined that CMS needs to beef up procedures that identify potential abuse and neglect, specifically using a data match similar to the one their auditors employed.

Because the entire process in Pennsylvania - from the initial report through the investigation - is undisclosed, it cannot be independently scrutinized to know whether the system is protecting nursing home residents.

Researchers and advocates alike said it was unconscionable that state regulations could shield information on nursing home abuse from the public.

"They don't want to release the data because it's going to be obvious when you get the data that something terrible is going on," said Charlene Harrington, a University of California at San Francisco professor emeritus of sociology and nursing who has studied the industry for decades.

Harrington added, "They're trying to hide the fact that they're not doing their job."

'A right to know'


While state Health Department officials here worry that without confidentiality nursing homes won't comply with federal law, California has posted the outcomes of its substantiated investigations online since 2015.

The agency has not ever had "a concern that facilities would stop self-reporting incidents" if made public, according to the California Department of Public Health.

Many of the biggest nursing home chains in Pennsylvania - Genesis Healthcare, ManorCare and GoldenLiving - also operate in California, where this information is released to the public.

Retired California state Sen. Elaine Alquist sponsored much of the legislation that overhauled nursing home oversight in the Golden State, including the creation of a system for timely reporting, stiffer penalties and public access.

"In the law, there needs to be a more defined link between nursing home abuse and public safety," Alquist said. "The public needs to know who the bad apples are."

In Pennsylvania, state law doesn't permit releasing information on abuse reports - even aggregated tallies - effectively leaving the public in the dark about what nursing homes are and are not doing to protect residents.

"You need actionable information," Alquist said. "The public has a right to know. We're talking about an extremely vulnerable population."

Neither Acting Pennsylvania Health Secretary Rachel Levine nor Aging Secretary Teresa Osborne would comment for this story on whether they favored greater transparency and supported changes in state law.

In speaking for both agencies, Health Department spokeswoman April Hutcheson, though, said in statement to the newspaper that they support the General Assembly updating laws that better protect seniors.

"Wholesale culture change begins with education, enforcement of regulations and evaluating our current regulations, all which is underway," Hutcheson said in an email to the Eagle. "Legislation and regulation alone will not improve nursing homes, but working together will."

Last year, the nursing home task force and auditor general both recommended revising current regulations, which haven't been updated in nearly four decades. Despite being pressed on its status, Hutcheson declined to elaborate.

State Sens. Judy Schwank of Ruscombmanor Township and Art Haywood of Montgomery County, both Democrats who sit on the state Senate Health and Human Services Committee, said the reporting and transparency issues the Eagle has raised deserve further investigation.

State Rep. Mark M. Gillen, who is a co-sponsor of a House bill this session that would amend the statute addressing neglect of a care-dependent person, said any reform effort would require collaboration and resources for more effective deterrence, reporting and prosecution.

"Pennsylvania is graying," the Robeson Township Republican said. "I think we're long overdue for a more surgical examination of our caregiver facilities so that the tragedies of yesteryear don't repeat themselves."


When it comes to protecting elders from abuse, there are a number of impediments at each step in the process, but none more frustrating than police inaction.

"The police don't do anything when we call," said Eric Kiehl, a spokesman for the Pennsylvania Health Care Association, a statewide member organization for nursing homes. "We can't do the investigation."

Although the Berks County district attorney's office does not have a designated elder abuse unit, per se, it does have two detectives and an assistant DA working these cases.

The reason more are not prosecuted - advocates and those in law enforcement agree - are the inherent challenges that come with elder abuse cases.

"Many times we're dealing with individuals who may have been found not to be competent or have a guardian appointed," Adams said. "Those are very difficult cases."

Because the district attorney's office is not the responding agency, mounting a prosecution hinges on the decisions made by local law enforcement, some of which are not 24-7 responders, let alone trained in how to handle elder abuse cases.

The San Diego County district attorney tapped Paul Greenwood, now a nationally recognized expert and in-demand speaker on elder abuse, to head up an elder abuse unit in 1996. He started first by talking to police officers and sheriff's deputies, asking why they didn't refer any cases for prosecution.

After two decades and 500 felony prosecutions, Greenwood blames police reluctance on a lack of training and laziness. Police and prosecutors often find other cases more attractive.

"I think this is where the elected district attorneys of Pennsylvania need to become much more proactive and not just expect these cases to fall in their lap, because they don't," Greenwood said.

The way Greenwood sees it, combating this requires prosecutors to take the initiative."We've got to be the ones to shake the trees," he said.

I think the truth is coming out that there's too much lobbying in favor of nursing homes and that lobbying is protecting them at the expense of the residents.