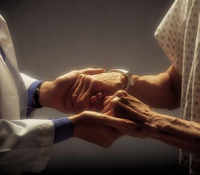 The Marin County Board of Supervisors unanimously passed a resolution last week to allow for an additional 30-day involuntary psychiatric hold, resulting in a total of 47 days of possible treatment for those deemed a danger to themselves or others. The additional hold will give clinicians more time to assess and stabilize clients, who are admitted to Marin General Hospital in Kentfield. “The legislative intent of [the resolution] is to really reduce the number of gravely disabled persons who we conserve,” said Dr. Jei Africa, director of the Behavioral Health and Recovery Services division of Marin Health and Human Services. He was referring to conservatorships, in which a judge appoints a legal guardian responsible for managing an individual’s financial affairs, health care and living arrangements, significantly curtailing that person’s civil rights. People placed under the extended holds are still entitled to due process through a review hearing after the initial 72-hour evaluation, or by filing for habeas corpus. In 2015, the latest year for which data is publicly available, 1,248 people in Marin were held for an initial 72-hour psychiatric evaluation. Out of those, 82 were assigned to permanent conservatorships. Similar resolutions extending the psychiatric hold have passed in Los Angeles, San Francisco and Solano, resulting in fewer permanent conservatorships—only 38 in San Francisco in 2015. In Marin, the resolution was originally proposed in May, but was put on hold to allow for more community feedback. Several members of the public spoke up at last Tuesday’s meeting in support of the resolution (no one spoke against it). The executive director of the National Alliance on Mental Illness, Kelli Finley, offered strong support for the resolution as an additional resource, and said she’s had discussions with over 300 family members and consumers dealing with mental illness. Alyssa Bradley, a lifetime Marin resident who said she was held—she believes wrongly—at Saint Helena Hospital for six days under an involuntary psychiatric hold, also spoke in support. “I do think this is a very, very, very good idea to have these 30-day holds…to fully assess [a client’s] situation before they are forced into a conservatorship,” she said.

Great idea giving people time, the much needed chance to be saved from a life under conservatorship/guardianship losing all of their rights and all of their income and property most often 'until death do they part'.