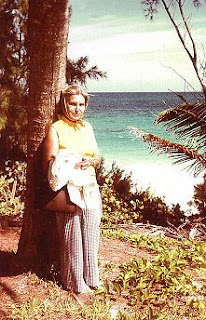 My Grandparents often traveled from the Ukraine to the United States , and on one visit, my Mother, Stephanie, was born in NYC.

When the war started, my Mother was living in Bratislava , Czechoslovakia . The Red Army was coming and was roughly 90 miles away. My parents packed a suitcase and escaped, taking the last cattle car before the bombs fell. (My father was in the Ukrainian army and held a high position in the Ministry and the family would have been sent to Siberia.)

That was the first time my Mother lost all her treasured things. It took one year to travel to Bremenhaven, Germany to get a boat that my Grandfather had arranged for the family to go to the US where my Mother was a US citizen. We had very little to eat and looked like we had come from a camp.

My parents started again in a walk up apartment. My Mom was going to night school and working in a sweat shop making flowers for hats. My father, an engineer, washed dishes until he could get an engineering job.

My Mother was very good with hats and finally worked for Miss Mary. At that time, women wore hats and Miss Mary’s hats ended up in Bergdorf Goodman’s in NYC and many fine stores. One of Miss Mary’s clients was Jackie Kennedy.

My Mother had a hard life, she worked hard for her money and saved what she could. When she got older, my ex-brother wanted her in assisted living in FL and wanted to sell her house. He drugged her and took her to FL without my knowledge. With a “separate agent power of attorney”, he transferred all of Mother’s money under his and Mother’s name.

I snuck my Mother out of FL and back to her home. He told me if I wanted the money for Mother, I’d have to take him to court. "I am Mother's financial advisor", he said, so I had to apply for guardianship to get at Mother's funds for her to live on and also pay her bills.Mother was afraid he’d take her again.

Instead of appointing me as Mother's guardian, the court s put a guardian third party guardian (a stranger) in place.But my big question is, who guards the guardian? So far, I can’t find the answer. The guardian was not a protector but instead was a predator.