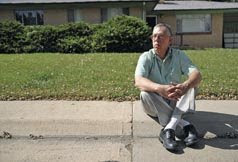 The Colorado State Judiciary is reviewing its protective proceedings, and the Silvia Tessadri case is a big reason why.

When Tessadri entered the care of guardian Ann Grasee by court order in 2003, Tessadri had an estate valued at more than $500,000 as well as a home and trust. Grasee charges $100 per hour for her care, a standard fee for guardian ad litems in Colorado.

Tessadri's son, Rudy Bush said guardian Ann Grasee and conservator, Michael Beutz, have spent the $500,000 and are now listing his mother's house on the market.

Beutz and Grasee said the profits from the sale would be used to care for Tessadri, whose estate is now nearly bankrupt.

Bush lived with his mother in the $180,000 Lakewood house until the court ordered he move from the premise. Now, the property is being rented under lease until a buyer can be found.

"When it was determined there was no belief she would ever return home, it squanders an estate asset to have it empty," Beutz said. The trust (managed by Wells Fargo) wished to sell the house and received a court order to do so.

Bush said his mother should never have been put into guardianship or moved from her house into a care facility.

"A woman who had a half-million dollar estate and a house is now broke." "It's the saddest thing I've ever heard."

Call7 Investigators:
System Could Drain Your Retirement Savings
Bush's mother is one of thousands of elderly people in assisted living and nursing homes in Colorado whose affairs are overseen by court-appointed guardians and conservators, who run all aspects of their lives for a fee.

7NEWS Investigators found a state audit has raised serious questions about the case.

Beutz said his obligation is to protect her the best he can -- whether it's inquiring about someone he thought was a threat to his client or concern about a house with faulty wiring.

Even if the charges are justified, who is checking conservators' bills? Who's watching the money?

Ferrugia then asked, "Basically you have to rely on the good intentions of lawyers?"

Source:
Investigators: No One Oversees Court-Appointed Professionals
Posted by NASGA

The system is always saying that someone from within the family are the ones doing the abuseing, when are they going to open their eyes and see that it is the courts, and the laws that are in place that are the real abusers?

Hear is some of the comments and accusations that I hear the about the families of the "ward":

The family is stealing from them. - Who is the ones with all the money in the end? You got it the courts.

The family is forcing them to do things they might not want to, or shouldn't do. - Who is locking them up against their wills, and approving them to be drugged? Once again you got it the courts are. Not the family.

What gives the court the right to come in and take everything that our loved ones, who are US citizens, who have broken no law, and lock them up with the only charge being that they are elderly, and to take not only their life savings, but their very lives and lock them away from the people they love and need, and drug them, and lie to them? Do you call this PROTECTING AND PRESERVING? Well you might, but I call it ABUSE.

We need to and will put a stop to it. It is outragous that the system that is supposed to up hold the laws thinks that they are above it.

I say for the courts and it appointed people to take a long hard look at what they are in fact accusing familys and friends of doing to the elderly and disabled, and put a stop to it.

The loss of a ward's rights is total and final. Without arrangements for review or monitors for abuse, the ward can lose all control of funds, healthcare, personal choices, and possibilities for affection, a human need. This is done under the auspices of protection.

Yet, when problems arise, there is no intervention and when funds are gone, the blame is cast on family for "fightin' for the ward's interest" unnecessarily. The ward is not protected by the state as other citizens expect to be, the ward PAYS ATTORNEYS TO FIGHT THRU THE FUNDS until they are depleted.

Most citizens in this nation will NEVER earn $145/hr, but there exists a great possibility that their lifelong accumulation of assets could be billed against at that rate............UNDER THE GUISE OF PROTECTION!

Yet, the ward's rights are taken in a flash, there is always time to "protect" and rip away rights and plunder funds.

This is all about GREED,a national disgrace and shameful. This case screams of abuse of power, failure of fiduciary duties, gross misconduct, fraud and fraudulent billing practices, all civil and criminal offenses.

Furthermore, a full audit and investigation of all of the Guardianship case files is warranted. I suggest going back in the files, no less than 10 years.

There is no doubt, whatsoever, that this action would uncover a pattern of numerous cases of the Wards left without any assets, intentionally left impoverished with many forced to go on Medicaid. This is fraud and a federal criminal offense.

The guardian must be held responsible and accountable, in civil court and criminal court, and punished without mercy.

The responsible court
official(s)that failed in his/her duty to protect the Ward allowed this gross abuse of trust must be immediately removed from the bench and prosecuted without mercy.

Another family torn apart by the greed and corruption of an abusive guardianship.

This case also exemplifies that it's not just the Ward destroyed, but the whole family.

And the court's just singing a song and pointing the blame to everybody but the greedy pirates who have their pockets lined with Rudy's Mom's money.

I am so sorry, Rudy, for what you and your Mother have gone through.

I hope you will get your Mom back and your life.

A ward is usually placed under guardianship (and it is far too simple to get one)by force without proper notification to the ward or their families. This is done in secret with little or no evidence that guardianship is even necessary. Once this happens, the ward loses ALL of their constitutional rights - the right to vote, to choose where they live, who they see, the right to legal counsel of their choice... and are at the whim of a VERY corrupt and inhumane Probate system. The family has no legal recourse except the court.

I can only liken the emotional and financial result of Probate Court on my family to our own personal Hurricane Katrina.

This system is supposed to favor family over 3rd parties as guardians but fails to do this. Instead, corrupt attorneys and the good ole boy collusion that takes place inside the court room leaves a stranger in charge. A stranger who makes your family member a "for profit" business.

Often, in order to accomplish this, the lawyers and/or guardians make allegations against family members to neutralize them as candidates. They do not need to prove any allegations made against you. They need only mention that they "suspect" abuse is taking place. This court does not investigate criminal charges. It always acts to "protect" the ward. Once they gain control, they often repeat the information on public record but there is no recourse against allegations and you are guilty and not even allowed to prove yourself innocent. Your friends and family will believe that the system could not possibly work this way. They think that you must have done something wrong because this could not possibly be true.

The real abuse occurs once a 3rd party guardian is in place. They move you out of your home, prevent you from returning to it, sell it and use the proceeds to pay themselves generous fees. No matter how outrageous, fees are almost ALWAYS approved by the court without any scrutiny.

If the family complains or becomes too verbal about anything they see as a problem for their beloved family member, the guardian will limit their contact-no cameras, no visits, supervised visits or a restraining order barring any contact. They own the ward.

This is a real problem and it's getting worse. Something HAS to be done to stop this.

Probably the saddest thing about this case is that it isn't unusual or unique! This same scenario (just change the names, states and amounts of money involved) is being repeated over and over acroos the whole USA. The present generation of seniors are the current targets, and if we don't wake up and do something, the baby boomers are next!

At least there are warnings of bad weather and a hurricane or a tornado. And, most folks know the dangers from the news or through experience.

But, with Guardianships / Conservatorships, there usually isn't personal experience and there isn't much truthful information in the news and with no warning in most instances - just like that, life is forever changed in a very bad way, as if a plane crashed into your backyard - just like that.

As it is now, all one can do is be grateful that we barely survived the disaster with our lives, try to pick up the few pieces of our lives and mourn the loss of the family member that we lost to the guardianship system, as a Ward of the State.

BEWARE! They have their eyes on us.

In criminal matters the Colorado Springs Police and the Prosecution work together to build the strongest case against you. You need a skilled
Colorado Springs lawyer who will fight for you rights and your freedom. In all cases time is of the essence. Call your lawyers immediately to discuss what is your next best move to protect you rights.