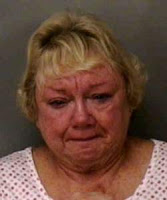 A 61-year-old Bartow woman was arrested Thursday on charges that she stole about $200,000 from an elderly woman with dementia.

King faces first-degree felony charges of exploitation of elderly, grand theft of more than $100,000, money laundering and criminal use of personal identification.

If convicted as charged, she could receive a maximum of 120 years in prison.

If only she got the 120 year sentence and could live long enough to serve it...

That is a large sum of money.

Phyllis Walden King never thought she would get caught for her crimes against someone who could not protect herself.

I just love it when the perps are shocked and surprised because they think they are smart and we are stupid.

I hope she gets the max of the max with special cirucumstances for taking advantage of an elder.

Shame on you King!

And, applause and standing ovation to the State Attorney's Office for pursuing this case to conviction.

This is the epitome of financial abuse. Why do caregivers, guardians and their attorneys think that the ward's money is available to them for the taking? All in the name of "caring" for the elderly person! What a shame!

She's crying in the picture because she got caught.

There was no remorse when she committed the crime and she certainly has no remorse now, except that she got caught.

Phyllis is not an evil person. Yes, she did wrong, but the woman for whom she cared was never abused. The elder woman's mind was clear enough the first couple of years that she was aware of and allegedly gave permission for Phyllis to pay some her own bills with L.'s checks. It got out of hand, and Phyllis is not making excuses for what happened. Don't condemn someone on just what you read. She is paying a heavy price now, and expects to pay a heavier one. There is a lot more to this story than you see here, so please keep an open mind.

To the person who said she had no remorse. Yes, she does. She did not go into the bank book with the intention of ripping anyone off. In the picture, you can see how frightened she is, and realizing the scope of what she's done. Phyllis is not a bad person. Horrible judgement? Yes. Scared to death? Yes. She is facing this, and telling the truth, so please keep your judgemental and cruel comments to yourselves.

Financial abuse IS abuse. $200 K and she brought jewelry for crying out loud?

She took advantage of a vulnerable person - a person entrusted to her care.

I can't say that Phyllis is an evil person; I don't know her and apparently you do.

But what she did was evil.

I look at that pic and I see someone very scared - for her own skin and what punishment she might receive.

Remorse? No. She didn't steal once - she continued to steal until the bill was up to $200K. Her remorse isn't for her victim; it's for herself.

well i guess we can figure out who the perps sympathizers are maybe her friends or those who did the same deeds? are making excuses theft is theft sure she looks like hell from remorse? or thinking to herself why did i do this now just look at the jam i'm in not worth it this time crime does not pay anon doesn't like cruel comments this stuff here isn'cruel it's our opinions heck when you are a victim of a crime then you see and feel what it is like to be blindsided and mad as hell sort of changes the picture and opinions drastically