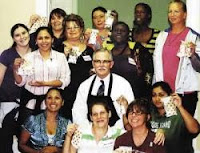 Two local judges were serving more than just warrants and jail sentences this past week by taking some time out to serve their community.

Both state District Judge Paul White and County Court-at-Law No. 1 Judge Bob Inselmann participated in service projects to show the lighter side of a judge's role.

On Thursday, White demonstrated his cooking experience by teaching the ladies at the Mosaic Center how to make marshmallows from scratch.

White's Drug Court program has partnered with the Mosaic Center since its inception a few years ago.

"A lot can be learned from making homemade marshmallows. It's not difficult, yet not something the everyday person ever thinks about," White said.

The judge said he sees a link between making marshmallows and following the right path in one's own life.

"Life is not difficult, either. We need to have faith in our abilities and take one step at a time, making sure it's the right step in the right order, similar to following a recipe for success," he said. 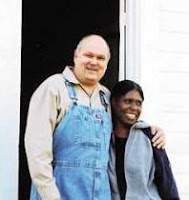 On Saturday, Inselmann led a group of more than 50 probationers at 8 a.m. to work on a restoration project at the Dawn of Light Lodge No. 79 on Leach Street.

The building was the site for the meetings of Lufkin's black Masons, constructed more than 85 years ago, a press release stated.

"Community Service projects are usually required as a sanction for most misdemeanors, but working on a project such as this not only teaches discipline, but about preserving Lufkin's heritage," Inselmann said.

Full Article and Source:
Judges Take to the Streets (and Kitchen) to Help Community
Posted by NASGA

It's good to see the judges doing something good for the community off the bench.

It's good to start the day with a positive story!

Hats off to both of these judges!

This article made me feel good today. It's nice to see some good news and people helping people, isn't it?

Thanks for this one!

What a great example these judges are setting!

This benefits everybody. It's great!