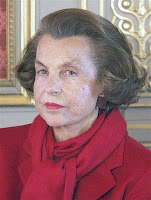 A lawyer for France's richest woman says his client, L'Oreal heiress Liliane Bettencourt, has refused to undergo medical tests aimed at determining whether she was in a weak state when she lavished a friend with $1.44 billion in gifts and cash.

A judge ordered 87-year-old Bettencourt to undergo the tests before the April trial of her friend, Francois-Marie Barnier. The 62-year-old photographer faces exploitation charges stemming from allegations by Bettencourt's daughter that Barnier took advantage of the elderly billionaire's fragility to bilk her.

Bettencourt's attorney, Georges Kiejman, said she will not undergo the medical tests, which were supposed to be carried out before March 10.

I don't blame her a bit, but I'm afraid refusing testing will only bring guardianship faster for her.

It's her money - if she wants to give it to the friend, then it's hers to give.

She and her daughter need to mend fences and stop the court battle. Court only benefits lawyers.