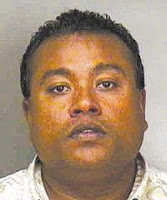 Asoka Perera, who stole more than $450,000 from an elderly woman, banks and tea supply houses, took a plea deal Monday and was sentenced to seven years in prison.

As part of a plea deal, Perera pleaded guilty to money laundering, theft from a person 65 years of age or older, criminal use of personal identification information and two counts of grand theft.

In addition to prison, Perera must serve 10 years of probation.

Circuit Judge Beth Harlan ordered that Perera must pay more than $457,000 in restitution to several victims. However, the figure will get larger. The judge will determine at a later hearing how much money one remaining victim, a tea supply company, should receive.

I am glad to see this guy get what he deserves!

This was a big set up for this man

Anonymous 1: FYI, your comment was removed for foul language... All opinions are welcome on our Blog, but no cursing or indecent language.