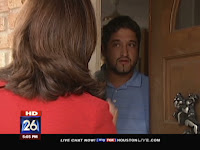 A neighbor convinced an elderly woman to give him power of attorney, and then, when she was in the hospital; He moved his family into her home!

Sounds crazy, but it's true.

When the elderly woman's husband died, she inherited a substantial amount of money.

Police eventually arrested the man and charged him with theft. He's now on probation and doing restitution. But he still lives in the neighborhood, so I paid him a visit and confronted him!

See Also:
Ripping Off Grandma - A Different Kind of Abuse
Posted by NASGA

Email ThisBlogThis!Share to TwitterShare to FacebookShare to Pinterest
Labels: Texas

This is the kind of reporter we need to confront bad guardians and judges!